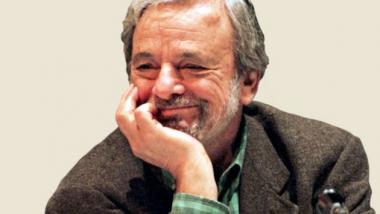 In addition to occasional musicals presented by companies from A.C.T. in the city to Theaterworks in the south and several in the East Bay — in addition to the largely un-adventurous and very expensive SHN Musicals emporium, there are now two companies in the city dedicated to musicals only, both announcing their next seasons.

The older and more offbeat 42nd Street Moon and the more recently established, “mainstream” Bay Area Musicals will offer close to a dozen productions between them.

The Shakespeare of contemporary musicals, Stephen Sondheim, 88, will get a canon of his own as the source and honoree of the Sweep, which aims to make 42nd Street Moon “the first theater company to do everything that Sondheim wrote for the stage,” says Thomas, adding that the series will include works “not just as a composer/lyricist (as a handful of other companies have done), but also as just a lyricist (Gypsy, West Side Story, Do I Hear A Waltz), and even as a playwright (Getting Away With Murder).”

Some shows will be full, mainstage productions, some will be in-concert presentations (surely the case with Follies), and some will be limited special engagements. Presenting two Sondheim shows a season — probably pairing in-concert and staged productions — Thomas necessarily takes the long view, expecting the Sweep to conclude around 2030.

The other project, the Back-to-Back Series presents musicals with their source material — think My Fair Lady and Pygmalion — together in repertory, with the same actors, directors, and designers.

“Since the beginning of the American musical theater, composers and librettists have looked to great plays for their source material,” says Thomas. “In our two most recent seasons alone, Moon has presented shows adapted from classics like Eugene O’Neill’s Anna Christie (New Girl in Town) and N. Richard Nash’s The Rainmaker (110 in the Shade).”

For the next season, Moon is incorporating both programs in the same slot by producing the 1934 Kaufman & Hart play Merrily We Roll Along and the 1981 Sondheim & Furth musical based on it in May–June, 2020.

Thomas is proud of the lineup of “a sultry and swinging take on Gilbert and Sullivan, a hilarious farce hot off of Broadway, one of the Golden Age’s greatest musicals, and the return of San Francisco’s newest Christmas tradition.”

Music direction for all shows is by Jon Gallo. Gypsy and The Full Monty will be produced in the Alcazar Theater; A Chorus Line and In the Heights in the Victoria Theater.

To celebrate the company’s fifth anniversary, McCoy says, “we wanted to program a season that really underscores our love for the remarkable evolution of the musical theatre art form.

“All four shows have shaped and transformed this craft of ours, and laid the groundwork for the creation of the innovative musicals that are lighting up Broadway today. And speaking of four shows, I am extremely excited to fulfill our audiences’ request for more BAM productions by adding an additional show to the roster for the first time.”

Despite being his "baby" project, Saturday Night evinces the wit and maturity that characterize Sondheim's more famous works.

Glittering Miniature Sondheim at the Eureka