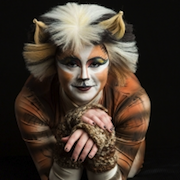 April 13, Saturday, 10 a.m. and 11:30 a.m., Malcolm X Junior High School: Berkeley Symphony “I’m a Performer” outreach concert. Ming Luke has taken the Berkeley Symphony’s Music in the Schools program to whole new heights, with his magnetic personality and great programming ideas. The “I’m a Performer” Family Concert is for children and their parents who play an instrument, at any skill level, allowing them to participate in playing tunes with the orchestra. But you can also come just to listen and enjoy the fun. Read the SFCV story about the program from two years ago: here.

April 12-21, Fox Theatre, Oakland: Broadway By the Bay presents Cats. It’s 18-year run on Broadway and in London’s West End established it as one of the most successful musicals ever. Even though it’s less of a children’s musical than one might think, it has entertained younger generations by the thousands, and it is certainly getting a professional production from Broadway By the Bay.