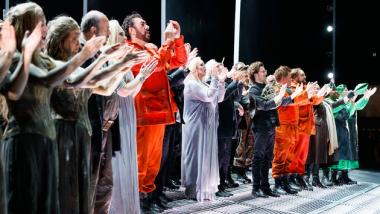 Matthew Shilvock, S.F. Opera’s current general director and Gockley’s successor in the position, presented the award, remarking on the “power of opera” as a dominant theme of Gockley’s artistic and managerial legacy. Less abstractly, Gockley’s tenure as an American impresario, with 30 years at the helm of the Houston Grand Opera prior to his move to San Francisco, saw an increased emphasis on world premieres and commissioned works, among them John Adams’s monumental Nixon in China. More practically, he spearheaded the model of co-production, a now-standard approach to financing opera that defers production costs to partner companies.

Accepting the award on the War Memorial stage, before a sold-out crowd and a cast, crew, and orchestra of Wagnerian proportions, Gockley wished to thank the company: “I dedicate this medal to the people who are on stage with me today, who have given their lives to create beauty and drama in a way that is really indescribable.”

The venerated artist earns the company’s highest accolades for his powerful set and costume designs, including those for the current run of Turandot.