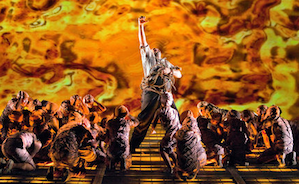 'All Opera Is Expensive'

About the above item's issue of the Met's expenses — labor vs. poppy fields — La Cieca of Parterre.com writes:

Producing opera costs money whether it's done by a wild "regie" director or one of a staid conservative like Franco Zeffirelli. Materials cost money, labor costs money, rehearsals cost money. Even reviving a fairly recent new production is costly: The sets have to be tested and refurbished, the costumes have be to fitted again on singers who may have changed size in the previous year or two, special lights have to be rehung and refocused and so forth.

There really is no way to do opera on the cheap at a theater like the Met: At those ticket prices, audiences demand a certain level of visual sophistication and glamour. It's a huge stage and a huge auditorium and it takes something spectacular to fill it, whether that's painted drops, video projections or that gorgeous poppy field that everyone is so busy clutching their pearls about.

Yes, it is possible to perform Il trovatore in front of some nondescript backdrops, with the singers wearing whatever leftover costumes someone dug up from Stivanello's warehouse, and a little traffic direction to make sure nobody falls into the orchestra pit. But that's not opera, that's the music from an opera being performed in an opera house.

San Francisco Opera's critically and even financially successful Ring cycle cost approximately $23.4 million from the 2008 Rheingold, the 2010 Walküre, two single performances of Siegfried and Götterdämmerung in 2011, before three complete cycles of the four operas. Gockley managed to make this huge project happen even when Washington National Opera pulled out of the co-production agreement.