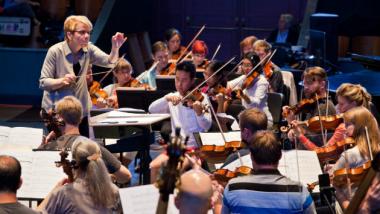 The Cabrillo Festival of Contemporary Music has introduced northern California audiences to a lot of the best, new orchestral music of the last five decades. Its 2016 lineup, just announced, will mix established, star composers and performers with their younger colleagues.

The 54-year-old festival, which plays in Santa Cruz on July 31- August 13, has been led, for almost half its existence, by Music Director Marin Alsop. Her 25th anniversary year will also be her last with the festival. Since she arrived, the festival has adopted a more informal ambiance and the focus is now entirely on living composers, many of whom Alsop has championed and have become familiar faces at the festival.

Among this season's highlights are several world premieres including a new symphonic ballet by Anna Clyne, choreographed by Kitty McNamee and danced by members of Hysterica Dance Company; Spider Dance by John Adams, commissioned in honor of Marin Alsop by the musicians of the Cabrillo Festival Orchestra; a Festival-commissioned work by Michael Kropf, who studies with David Conte at the S.F. Conservatory of Music, and whose commission is underwritten in part by the John Adams and Deborah O'Grady Pacific Harmony Foundation; and the West Coast premiere of Kevin Puts' The City.

In addition to the featured evening concerts, the Festival continues its tradition of hosting open rehearsals, pre-rehearsal talks, and the Conductors/Composers Workshop, a professional training program focusing on the creation and performance of new music.  Most performances are in the Santa Cruz Civic Auditorium.