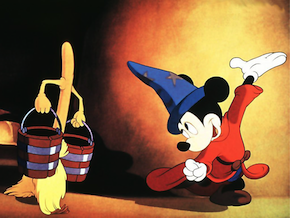 And the Granddaddy of Them All: Fantasia

San Francisco Symphony will offer a combination of the original film and scenes from Fantasia 2000 screened on May 31 and June 1, with the home-team orchestra playing the score. SFS Director of Artistic Planning John Mangum explains:

For the previous films in this season’s film series, the score needed to be scrubbed from the soundtrack in order to play the film with dialogue and sound effects. Since there is no dialogue for the Fantasia, this process is not necessary; we simply project the scenes without any sound, allowing the San Francisco Symphony to accompany the action.

In order to keep the orchestra in time with the film, our conductor, Sarah Hicks, has an in-ear click track. She also has a small video monitor in front of her displaying what’s being projected on the screen, overlaid with all sorts of visual information to indicate downbeats and cues.

Unlike the 1940 film, which opened with the (Philadelphia) orchestra filing in to the stage and a narrator explaining what is to follow, the SFS presentation — a hybrid of the two films — won't have a narrative component, just a sequence of individual scenes.