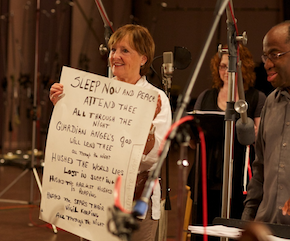 Angel Heart in the Hearts of Oakland Kids

Angel Heart, coming to Cal Performances on Oct. 6, is a national story with lots of local iniative and involvement.

And where it is featured in the outside world: in an upcoming feature in The Wall Street Journal, the release of a music storybook CD on Sept. 24 (with Jeremy Irons as narrator); a performance in Carnegie Hall on Oct. 21; an iPad app created in collaboration with Mirada Studios; and tentative plans for a 2014-2015 tour, in conjunction with educational/community outreach residencies. Watch the brief trailer.

Angel Heart is a "live-music storybook," based on Cornelia Funke's story, about a girl who finds peace after heartbreak with the help of a petulant guardian angel. The collaborative project was born when composer Luna Pearl Woolf and Lisa Delan realized that they have shared "a dream of lullabies."

"Unbeknownst to the other," says Woolf, "we imagined creating the kind of recording we wanted to hear as we tucked our children in at night." Both artists independently conceived of recording this children’s album with Haimovitz, Woolf’s husband, and his Grammy-nominated ensemble, Uccello.

Woolf and Delan compiled a selection of songs reflecting their musical loves — some by composers ranging from Engelbert Humperdinck to Lennon and McCartney, others traditional folk songs and lullabies, all arranged for an all-cello ensemble by Woolf and composers Lewis Spratlan, Jake Heggie, Gordon Getty, and David Sanford, to be linked by music Woolf would compose herself.

The Oakland children chorus has participated in the project from the beginning, singing on the CD recorded in 2011 at Skywalker Sound. St. Martin de Porres is a small parochial school in Oakland. It is named for a 17th-century Dominican brother from Peru who was famous for establishing orphanages and children’s hospitals. He was canonized in 1962.

St. Martin’s has some 200 "students of color," fully 90 percent of them on financial assistance, and qualifying for a free or reduced-cost lunch. The music program was added later, with Flicka's help and continued involvement. Says Ann Magovern, president of the school:

We are incredibly grateful to Ms. Flicka who continues to open the doors of music and the arts for our children. Without her, none of this would be possible. Please view this YouTube promotional video, footage from a rehearsal two years ago, the same music that they will be performing on Oct. 6.

The rehearsal included the cast to be heard at Cal Performances, and the late Zheng Cao.