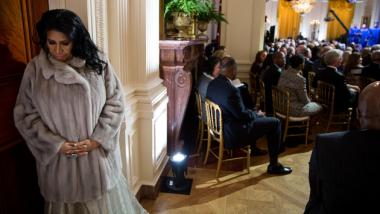 Aretha Franklin, “Queen of Soul,” Is Dead at 76

When Aretha Franklin died last week in Detroit at the age of 76, the tributes rolled in swiftly. The “Queen of Soul” was not just an important figure in a parade of talent, she was an iconic singer whose musicianship transcended genre and was for many of us a symbol of the human spirit at its most generous.

Likely the most beautifully worded and one of the most heartfelt statements came for the former President and First Lady, Barack and Michelle Obama, who wrote:

For more than six decades since, every time she sang, we were all graced with a glimpse of the divine. Through her compositions and unmatched musicianship, Aretha helped define the American experience. In her voice, we could feel our history, all of it and in every shade—our power and our pain, our darkness and our light, our quest for redemption and our hard-won respect. She helped us feel more connected to each other, more hopeful, more human. And sometimes she helped us just forget about everything else and dance.”

Franklin broke out in 1967, on her first record for Atlantic, after a few years at Columbia, putting out “I Never Loved a Man (the Way That I Love You),” with Franklin playing the piano as well as singing. Her powerful voice, mixing sacred and secular, gospel and blues, was completely distinctive and instantly recognizable. The message she delivered, over the 50 years of her career, was that she (and everyone else) was worthy of respect, which may be why the most famous song in her long legacy of hit songs was her earthshaking cover of Otis Redding’s “Respect.” She paved the way for other independent women artists, and enjoyed a fruitful collaboration with Carole King, whose “(You Make Me Feel Like) a Natural Woman” was another enduring hit in Franklin’s performance.

The statement was something that was very important, and where it was important to me, it was important to others. It’s important for people. Not just me or the Civil Rights movement or women — it’s important to people. I was asked what recording of mine I’d put in a time capsule, and it was ‘Respect.’ Because people want respect — even small children, even babies. As people, we deserve respect from one another.”

At the top of her game, Franklin made an epochal crossover appearance at the Fillmore West in 1971, which was captured on a live recording. In the late 1970s, her career seemed to be waning, but she made a comeback in the 1980s with “Jump to It,” and then, in 1985, singing a duet with the Eurythmics’ Annie Lennox on “Sisters Are Doin’ It for Themselves,” introducing Franklin to the MTV generation.

Although sick over the past few years, Franklin never stopped singing or releasing recordings entirely. Her voice never deserted her, and she was, as classical fans know, able and willing to step in for an ill Luciano Pavarotti to sing “Nessun dorma,” from Turandot. At the 1998 Grammys. Indeed, there are few people in music or entertainment who have (or will have) the longevity of Franklin, whose 100 songs on the charts are a testament to her lasting legacy.

Aretha Franklin’s memorial service will be August 31. She will be buried at Woodlawn Cemetery alongside members of her family.