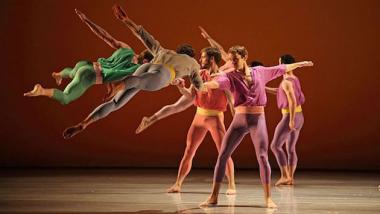 The biennial Berkeley Festival & Exhibition has always been a varied and attractive event, presenting music from the Medieval, Renaissance, and Baroque periods. This year it is adding a new dimension that makes terrific sense, which makes me wonder why it hasn’t been done before.

A new partnership between the festival and the Berkeley Art Museum/Pacific Film Archive (BAMPFA) is adding screenings of important music and dance films to the festival, May 16-June 15, to be shown in BAMPFA’s new digs in downtown Berkeley.

The inaugural Early Music Film Festival presents six films of music and dance, beginning on May 26 with the Mark Morris Dance Group’s performance of L’allegro, il penseroso ed il moderato, Morris’ dance staging of the Handel oratorio captured on film. (There will be a 2 p.m. matinee screening as well on June 8. These two shows are free, tickets for the other screenings range from $7 to $12.)

Gérard Corbiau’s Le Roi Danse (The King Is Dancing) follows on May 29, a lavish costume drama set in 17th century France about composer Jean-Baptiste Lully and the court of the young Louis XIV where Lully and Molière collaborated on ballets for the future Sun King (until Lully broke with Molière, but that’s another story).

On June 9, it’s Marin Marais’ turn, yet another luminary in Louis XIV’s court, in Alain Corneau’s biopic, Tous les matins du monde (All the Mornings of the World). With Jordi Savall’s tremendous soundtrack of Marais’ viol music, the film features Gérard Depardieu and Guillaume Depardieu (father and son) as the aging composer and his younger self.

Early-music specialist Ton Koopman is the subject of Paul Hegeman’s Live to Be a Hundred, showing the conductor during rehearsals and performances with the Amsterdam Baroque Orchestra & Choir. Savall appears in performance with Koopman; the documentary is shown on June 10 at 1 p.m.

Jean-Marie Straub and Danièle Huillet directed The Chronicle of Anna Magdalena Bach, showing at 2:30 p.m. on June 10 — a convenient doubleheader with the Koopman film (above). Dutch harpsichordist Gustav Leonhardt plays Bach; the story is told by his second wife, played by Christiane Lang. Bach’s music is performed by members of the Concentus Musicus Wien.

The final offering in the film series, on June 15, is Admeto, by Agnes Méth and Doris Dörrie. Handel’s opera Admeto, re di Tessaglia is set as Butoh, a form of Japanese dance theater. The music is performed under the direction of Nicholas McGegan and features David Tayler (archlute) and Hanneke van Proosdij (harpsichord).

For a complete lineup of festival events, see the BF&E ticket website.