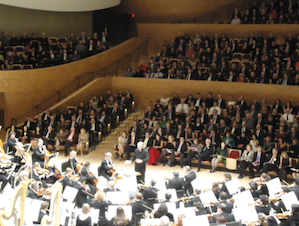 Stanford's Bing Concert Hall is a total delight. Architecturally and acoustically, it is without peer, combining contemporary style with a homey, warm ambiance.

The $112 million hall, named for major contributor Peter Bing, was put through its paces at the inaugural with an "electronic soundscape," choral works, the St. Lawrence String Quarter playing Haydn's Quartet Op. 77, No. 2; MTT conducting the San Francisco Symphony in works by John Adams and Debussy; and Frederica von Stade singing Bernstein's Take Care of This House.

Except for a somewhat distant sound from Flicka (whom I heard from the back of the hall, having changed seats to sample different spots), everything came through full and bright, clear and appealing.

This instant success stands in stark contrast with huge initial problems in New York, San Francisco, and elsewhere. Most halls need "tuning up," but Bing is ready to go.

The comparison with acoustician Yasuhisa Toyota's other creation in California, Disney Hall, is fascinating. I like the Disney very much, but it is too "live," where every little sound from everywhere comes through loudly — including the shuffling of feet at the other end of the hall.

Even though Bing is much smaller (842 seats versus 2,265 in Los Angeles), the unwanted audience background noise is virtually nonexistent, and sounds from performers — even of the full orchestra — don't hit as forcefully as in the Disney.

The Olcott-Toyota collaboration succeeded visually and acoustically with huge, unconnected convex panels ("sails") of varied sizes that form the walls under the "floating cloud ceiling": They look spectacular and distribute the sound so well that the audience has pretty much the same experience wherever they sit in the round.

As for the performers, a violinist liked the way musicians can hear each other, a brass player thought otherwise, and called the sound on stage "too boomy."

The hollow space under the stage (parts of which move up and down smoothly, as needed) was not a novel, but still risky idea, but it works: instead of giving out an echo, it makes reverberance richer.

Except for leg space that not quite "business class," the hall is very comfortable, including discreet lumbar support for the back — something I haven't seen anywhere else.

With generous lobby space (if only Davies Symphony Hall had half of it!), and great facilities all around, Bing is outstanding every way.

No personal experience on this, but I am told reliably the uncrowded ladies rooms have lights outside each stall, red or green providing the necessary information to avoid squinting or knocking.

This is the kind of small consideration that's the hallmark of good architecture. Not to mention excellent lighting, noiseless and 'Goldielocks' air-conditioning (not too cold, not too hot), and on and on. See more about Bing Hall further down in the column.

Come join the band
And give a cheer for Stanford red
Throughout the land!