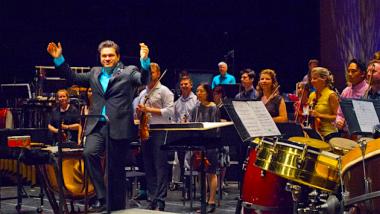 The 56th season of the Cabrillo Festival of Contemporary Music, its second under Music Director Cristian Măcelaru, is set and as usual, the net is cast wide.

Seventeen composers will show up in Santa Cruz the first week of August. They include 80-year-old William Bolcom, who made his first appearance at Cabrillo in 1976 and fellow octogenarian John Corigliano, who will hear Philip Edward Fisher play the Piano Concerto (1968).

But it also includes the return of Canadian Zosha di Castri, whose first orchestral piece, Alba was commissioned by John Adams and Deborah O’Grady and premiered at Cabrillo in 2011. This year, she returns with Dear Life, a 25-minute work for orchestra, soprano, and recorded narrator, based on a short story by Alice Munro, commissioned for the National Arts Center Orchestra of Canada. And Anna Clyne is back, who the Cabrillo faithful remember from RIFT (2016). This time, the orchestra plays, Abstractions (2016), inspired by five contrasting contemporary artworks from the Baltimore Museum of Art, which was also originally commissioned by Marin Alsop, Cabrillo’s previous music director.

Măcelaru is bringing some new faces to the party as well. Macedonian composer Pande Shahov (who teaches at London’s Royal Conservatory) will be on hand for the world premiere of his piano concerto, with Simon Trpceski as soloist. Romanian composer Dan Dediu introduces U.S. audiences to Grana, a work based on Gabriel Garcia Marquez’s Chronicle of a Death Foretold. And Andrea Tarrodi, of Sweden, makes her debut with Liguria, inspired by her visit to five idyllic fishing villages in northwest Italy.

Meanwhile, Karim Al-Zand, now at the Shepherd School of Music at Rice University, has re-orchestrated his setting of an Arabian Nights tale, Parizade and the Singing Tree for the Festival’s free family concert, which includes the always-popular instrument petting zoo. And Vivian Fung will be represented with her latest orchestral work, Dust Devils. Korean-American Peter Shin heads the youth movement at the Festival; his new work is commissioned by Adams-O’Grady’s Pacific Harmony Foundation.

The 2018 Festival is buoyed by the award of a $25,000 NEA Art Works grant to underwrite its program, which was announced in February.