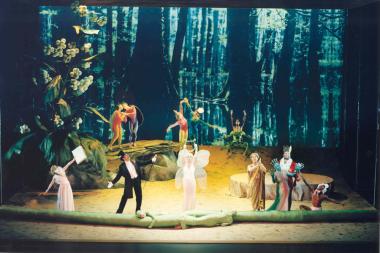 Cal Performances Executive and Artistic Director Jeremy Geffen today announced plans for the 2020–2021 season, his first since taking over from Matías Tarnopolsky a year ago.

The announcement comes in the midst of worldwide cancellations of performing arts events now reaching into the fall. Cal Performances, says the announcement, “looks forward to beginning its recovery from the COVID-19 pandemic crisis, which forced a premature end to the 2019–2020 season.”

Geffen said “We remain dedicated to our artists, our audiences, and to the UC Berkeley campus, and we reaffirm our belief that the arts are now more important than ever in helping people connect with each other and remain emotionally resilient through turbulent, traumatic times.”

Programs include something old: favorite works and performers from the past, such as the revival of the fabled Mark Morris production of Jean-Philippe Rameau’s Platée (May 7–9, 2021), and something new (more than a dozen debuts), and also something blue in the new category: the East London company Boy Blue with Blak Whyte Gray: A Hip-Hop Dance Triple Bill (March 5–7) as part of its first West Coast tour.

Hoping to open the season on Aug. 20, “Not Our First Goat Rodeo” brings a remarkable, diverse group together in the Greek Theater for a reunion after the original 2011 “Goat Rodeo Sessions.” Yo-Yo Ma (cello), Stuart Duncan (fiddle), Edgar Meyer (bass), Chris Thile (mandolin), and Aoife O’Donovan (vocals) will present new music from their release expected this spring.

Among the plethora of events in a broad range of genres, what caught my eye first was the return of Platée, a treasured memory from 1998. The Philharmonia Baroque Orchestra & Chorale will be in the pit at Zellerbach again, conducted by Nicholas McGegan, who is now the orchestra’s music director laureate; and with the Isaac Mizrahi costumes. Mathias Vidal will sing the fiendishly difficult title role.

Among many other highlights of the season are the Vienna Philharmonic, conducted by Gustavo Dudamel, in three different concert programs (March 2–4); pianist Mitsuko Uchida, leading the Mahler Chamber Orchestra from the keyboard (March 28); the English Concert offering a Handel opera/oratorio project with a concert performance of Handel’s Tamerlano (April 28); and the Eifman Ballet’s Russian Hamlet (June 4–6).

The March 4 Vienna Philharmonic concert is followed by a “Grand Gala celebration and fundraiser,” benefiting Cal Performances’ artistic initiatives and education programs; there is also a festive preconcert dinner as part of the fundraising.

Following Cal Performances’ exploration of the “transformative and therapeutic potential of music,” there will be public programs with scientists, educators, and performers, including soprano Renée Fleming and guests in residency discussing “Music and the Mind” (April 18); and Dance for PD, created by the Mark Morris Dance Group for people with Parkinson’s disease (no date set yet).

Also, the Dover Quartet performing Haydn, Ligeti and Dvořák (Oct. 11), and contemporary music ensemble yMusic with a program including a Cal Performances cocommissioned work by composer Andrew Norman (Mar. 13); composer/pianist Nico Muhly is joined by established new-music artists, including violist and podcast host of Meet the Composer and Living Music, Nadia Sirota, in a performance of lesser-known works by Philip Glass (Apr. 16).

Cal Performances welcomes the Dhamaal Dancers and Musicians of India (Nov. 13) for the first time, in a performance inspired by the colorful Hindu festival of Holi, as well as Ballet Hispánico (Nov. 21–22) in a program of works by women choreographers of Hispanic descent that includes the Bay Area premiere of Michelle Manzanales’s Con Brazos Abiertos.

Director Lars Jan and his Early Morning Opera company perform the Bay Area premiere of The White Album (Dec. 4–5), a theatrical and musical reflection on Joan Didion’s seminal essay. Tap dance star Caleb Teicher, previously a member of Michelle Dorrance’s Dorrance Dance, visits with his own ensemble (Dec. 12–13) in More Forever, a collaboration with composer Conrad Tao, who returns to Berkeley to perform his score for Teicher’s work on piano and other keyboard instruments.

Other events of note:

Pulitzer Prize winner Caroline Shaw will treat new UC Berkeley undergraduates to an unusual participatory activity as part of the annual Golden Bear Orientation on campus, leading the class of 2024 and other students new to Cal in a group singing and composition exercise.

Celebrating “150 Years of Women at Berkeley,” Cal Performances joins a university-wide, year-long celebration of the anniversary. Activities and programs throughout campus will commemorate the resolution unanimously approved by the Board of Regents, on Oct. 3, 1870: “That young ladies be admitted into the University on equal terms in all respects with young men.”

As part of these activities honoring the women who have studied at, worked for, and contributed to UC Berkeley, Cal Performances will honor the life and legacy of Betty Connors, class of ’45, the first staff administrator to bring the professional performing arts to campus. The season also celebrates the career and legacy of legendary actress Sarah Bernhardt, who in 1906 performed Phèdre in the Greek Theater, launching the performing arts series that later became Cal Performances.

Subscription packages for Cal Performances’ 2020–2021 season go on sale Tuesday, May 5, at noon. Single tickets go on sale on Tuesday, August 4, at noon at the ticket office at Zellerbach Hall, at (510) 642-9988, and at calperformances.org.

The wildly influential vocal ensembles have been teaming up to explore the thrill of harmony singing.