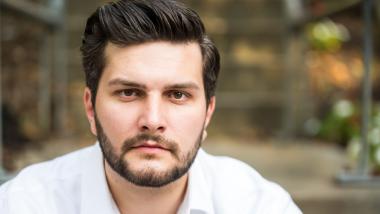 Less than a month out from opening night, San Francisco Opera has announced a major casting change. Andrew G. Manea, a young Romanian-American baritone and current Adler Fellow, will assume the role of the Duke of Nottingham in Donizetti’s Roberto Devereux, with performances beginning Sept. 8; he takes over for Polish opera star Artur Ruciński, who is recovering from lung injuries sustained in a bicycle accident with an automobile.

Fortunately, Ruciński is said to be on his way to a full recovery. But in the meantime, Manea, a 2016 Merola Artist, will make a role debut as Nottingham, a substantial part on rather short notice. (Adler Fellows do sometimes serve in an unbilled capacity as role covers, and less often as supporting cast members in mainstage productions.) Manea made his company debut last summer as Marullo in Rigoletto, which he followed up with the Marquis d’Obigny in last year’s production of La Traviata.

No longer a Verdi party guest, Manea plays the Duke in six performances next month. He joins soprano Sondra Radvanovsky as Elisabetta, Queen of England and tenor Russell Thomas as Roberto, Earl of Essex in Donizetti’s setting of court intrigue in Elizabethan England.

S.F. Opera’s upcoming season kicks off next month in Romantic fashion — and stays that way for quite some time. Cavalleria rusticana, Pagliacci, and Roberto Devereux will play through the end of September, with Tosca and Richard Strauss’s Arabella following on their heels.

The Adler Fellowship fosters emerging opera talent. A concert showcases the departing class just as the new roster of rising stars is announced.