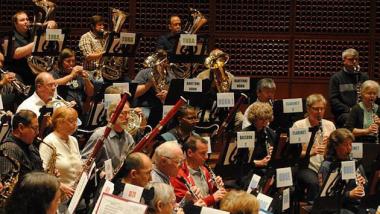 Two of the San Francisco Symphony’s many community programs are being cut back, San Francisco Classical Voice has learned. The SFS Board of Directors is said to have voted to discontinue the Community of Music Makers (CoMM) at least temporarily, and make a deep cut in the Instrument Training and Support (IT&S) program for middle and high schools in San Francisco.

SFS Communications Director Oliver Theil responded to a request for comment by confirming that changes are being made, saying that “The adult, amateur music-making program Community of Music Makers will be on hiatus for the 2016–2017 season ... Also affected next season is our Instrument Training and Support program for middle and high schools in San Francisco.

"The IT&S program, which is part of our ongoing collaboration with the S.F. Unified School District, also does not have the dedicated funding it had in previous years. While the most important elements of this important program for school children will continue, we are scaling it back in the coming year to the levels of dedicated funding available for the program while working to raise new funds to restore it."

Theil emphasizes the Symphony’s commitment to these and other programs:

Overall, the Symphony spends $3.8 million on education and community programs, among the most comprehensive of any performing arts organization in the country.

It is not unusual for program scope to change over the years, whether through expansion or contraction, according to the dedicated funding available. We firmly believe in the value and potential of both of these programs. The support of our philanthropic community has never been more important to sustain programs like this.

The budget reference is to fiscal year 2015, the most current one that SFS reported to the IRS. That year showed a deficit of $4.35 million on an operating budget of $78 million (and a $15 million drop in the value of the endowment compared with the previous year).

CoMM started in 2011 with dedicated funding from two foundations that support music education and community programs. It promotes active lifelong music making, providing opportunities for adult amateur musicians, singers, and chamber ensembles by enabling them to make music on the stage of Davies Symphony Hall. Over 1,000 community members take part in workshops each year under the guidance of the Symphony’s musicians and artistic staff. “As is often the case, there is great energy starting a program,” says Theil, “but over time sustaining the required funding sources can be challenging.”

The IT&S program is part of an ongoing collaboration with the San Francisco Unified School District, and Theil says “the most important and impactful elements of this important program for school children will continue.” According to an SFCV source, the board has called for a 75 percent cutback in financing for the program. Launched in 2006 and designed to assist instrumental music programs in San Francisco’s public schools, IT&S was expanded during the 2011–2012 centennial season to support every orchestra and band in the city’s public middle and high schools.

Continuing programs include Adventures in Music (AIM), launched in 1988, and serving students in public elementary schools and 3rd, 4th, and 5th-grade students in a number of independent and parochial schools. In the previous year, AIM served 25,137 students and 1,157 teachers in 92 schools. More than 1,100 ensemble performances were presented in San Francisco public elementary schools.

SFS Executive Director Brent Assink noted in a Musical America profile that “the revitalization of Adventures in Music and SFSKids.com, a website devoted specifically to the younger crowd” were among the most important accomplishments he set in motion with the Symphony.