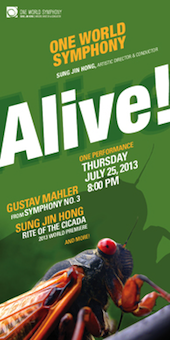 Cicadas: 'Chorus of the Billions'

Of the One World Symphony's premiere of music director Sung Jin Hong's Rite of the Cicada, the composer writes:

Symphony of a Thousand may have been written by Gustav Mahler, but Brood II cicadas have been serenading the Northeast this summer as a living "Chorus of Billions." When my wife Adrienne Metzinger and I first heard their soaring song during a hike along the rolling Catskills last month, we thought the sound had to be extraterrestrial.

We were treated to an intoxicating aural experience. We returned to the same location a couple of times during June to enjoy and record the resonating abdominal drumming from the males and wings flickering from the females. Inspired and rejuvenated by the sea of spellbinding sonorities, my symphonic poem for full symphony and vocal soloist has been born: Rite of the Cicada.

Artists have been influenced by nature for centuries: Josquin des Prez’s El Grillo (1505), Jimi Hendrix’s Hornet’s Nest, Bob Dylan’s Day of the Locusts, 14th-century pottery from the Joseon Dynasty, and E.B. White’s Charlotte’s Web, among others. It's time to celebrate nature and our leaping and flying serenaders that evoke camp, hikes, summer days, and nights eternal.

How am I going to compose Rite of the Cicada? Am I going to include the recorded sounds and video footage of cicadas with a live symphony orchestra and vocalist? Should I imitate chirping and flicking sounds of cicada soloists and the organic lush crescendos of an entire chorus of cicada? Should I compose a score resembling a science fiction horror film with special sound effects full of marches, shrills, trills, chirps, squawks, and flicks? Should I collaborate with a modern DJ with mix-tapes?

Should Rite of the Cicada be related to humanity? The Brood II cicadas mark more than just 17-year intervals in our region, but they inspire self-discovery from their precious lifecycle. Concluding almost two decades of purgatorial meditation, these cicadas have risen from the earth, molted out of their thin shells, and emerged for a couple of weeks of flying, lovemaking, and procreation. They are the original social networkers.

Three sections within the broader narrative:

The musical tribute to cicadas will have its premiere at the orchestra's next concert, on July 25, in Manhattan's Church of the Holy Apostles, along with Mahler's Symphony No. 3.