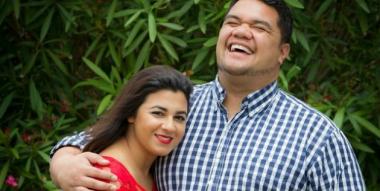 For the first time in the nearly four-decade-long history of the San Francisco Opera's Adler Fellowship, named after the late general director Kurt Herbert Adler, a couple has been selected for the program.

Among the 10 singers named on Monday as 2016 Adler Fellows: tenor Pene Pati and soprano Amina Edris, both of New Zealand. They have been engaged since last year when he popped the question at a concert in front of 7,000 people. ("I had no plan B if she said 'no,'" a much-relieved Pati said after the event.)

Pati also has a distinction, which may be a first: he turned down the fellowship last year. But now he is welcomed back, even as was the prodigal son: talent will out.

There are two pianists continuing their Apprentice Coach Fellowships: Ron Michael-Greenberg (Montreal, Canada), for the second year, and Noah Lindquist (Brooklyn, NY), for the third year. They work closely with Mark Morash, director of musical studies of the Opera Center, and John Churchwell, head of music staff at S.F. Opera.

The program is a multi-year performance-oriented residency, offering advanced young artists intensive individual training, coaching, and professional seminars, as well as a wide range of performance opportunities, which include casting in the company's mainstage productions. Adler Fellows are selected from Merola Opera Program participants. Singers around the world assisted by Adler Fellowships in years past now number over 150. Watch Patricia Racette speak about the importance of the fellowship in her career.