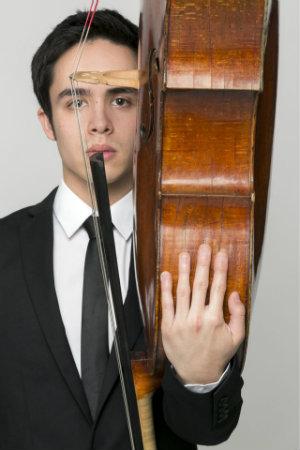 One of the Crowden School's many distinguished alumni, cellist Jay Campbell (Class of 2003), has just added to his trophies in a big way. A former student of Milly Rosner, Campbell, 26, is already a multiple award- and grant-winner, having performed in Carnegie Hall, Alice Tully Hall, Avery Fisher Hall, Kultur und Kongresszentrum-Luzern, and the Aspen Music Festival.

The prominent San Francisco cellist, Bonnie Hampton, one of the judges at the Naumburg, called Crowden Executive Director Doris Fukawa with the news, telling her that "Jay plays contemporary music beautifully, and is a very unusual player. It was a pleasure to phone up Crowden with the good news!"

More than a hundred cellists participated in the initial worldwide competition, the field narrowing to 60, then to 12, and then there were five finalists. The jury consisted of Nicholas Mann, David Geber, Natasha Brofsky, Thomas Demenga, Norman Fischer, Marta Casals Istomin, Michael Kannen, Richard Wernick, and Philadelphia Orchestra principal cellist Hai-Ye Ni, herself the product of San Anselmo's San Domenico School, the S.F. Conservatory of Music, and S.F. Symphony Youth Orchestra.

Campbell has long been dedicated top contemporary music - he made his debut with the New York Philharmonic in 2013 performing the music of Tan Dun. He has collaborated with an array of artists ranging from composers including Elliott Carter, Pierre Boulez, Kaija Saariaho, and John Adams, to saxophonist Steve Coleman, to members of Radiohead and Einstürzende Neubauten.

His close association with John Zorn has resulted in over half a dozen new works for cello, and his article on the music of Pierre Boulez was recently published in Arcana VII. Hen to Pan, a feature disc with all new works written for him by Zorn, was released this year 2015.

Campbell began playing the cello at the age of 8 at the Crowden School; he is currently an Artist Diploma candidate at the Juilliard School with Fred Sherry. Crowden School Director oif Music Eugene Sor commented on his Naumburg performance:

Jay is a tremendously versatile cellist who is equally adept at interpreting the most difficult contemporary pieces as he is at spinning the most exquisite phrase in a Bach Suite or Brahms sonata. He was a technical marvel in his days at Crowden, able at an early age to play tremendously challenging works such as Prokofiev's Sinfonia Concertante and Barber's Cello Concerto.

His technical prowess combined with his sensitivity and ability to convey an enormous range of characters and colors have made Jay a compelling musician that people really must hear. All of us at Crowden are so proud of him.