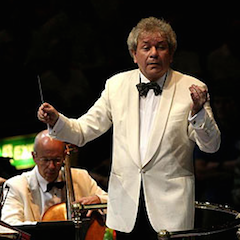 Who but top Czech musicians should celebrate Antonín Dvořák? Fortunately for Bay Area audiences, it will be the 118-year-old Czech Philharmonic marking the 110th anniversary of the great composer's death with a concert in Zellerbach Hall on Nov. 9 at 3 p.m..

Soon after its founding in 1896, the Czech Philharmonic became the most noteworthy orchestra in the country. Even before the First World War the orchestra had built a considerable reputation for itself in concert halls across Europe. Over the course of its 118 year history, the orchestra has fostered numerous significant personalities among its ranks. The Czech Philharmonic has always represented genuine artistic merit, and its tradition and success has uplifted it to a fundamental symbol of Czech culture.

Under the baton of Jirí Belohlávek (who exactly four years ago wowed San Francisco Opera audiences in the The Makropulos Case), the Philharmonic will perform Dvořák's 1877 Stabat Mater. Belohlávek held the position of chief conductor on and off between 1990-1994, according to his biography, but it's not that simple. He has continued since his return to the orchestra in 2012.

The now apparently harmonious relationship had some stormy antecedents: After serving two years as an assistant conductor at the Philharmonic, he led the Brno Philharmonic and Prague Symphony, became chief conductor of the Chech Philharmonic in 1990. But a year later, the orchestra voted to appoint Gerd Albrecht its new principal conductor to replace Belohlávek, who resigned and founded the Prague Philharmonia in 1993.

Since the orchestra's public debut in 1994, the ensemble originally formed as a training orchestra has recorded and performed in concerts worldwide.

In 1997, Belohlávek became Professor of Conducting at the Prague Academy of Music and principal guest conductor of the opera company of the Prague National Theater; he is also currently chairman of the Prague Spring International Music Festival. In 2010, his re-appointment to the chief conductorship of the Czech Philharmonic Orchestra was announced, effective with the 2012-2013 season, with an initial contract of four years.