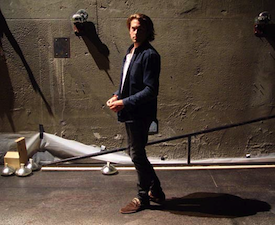 He just turned 30, so his career is ahead of him. But James Darrah, now working on the Merola Program's upcoming Don Giovanni also has an exceptional track record, some of which is reflected on his website (which he is too busy to update, he explains, apologetically).

The UCLA and NYU graduate (music, theater, and the classics) started directing opera at age 22 through a serendipitous invitation to work at the Split Summer Festival in Croatia.

Then, in just eight years, Darrah went hyperactive in Europe, Seattle (Semele), The Juilliard (Radamisto), Chicago (Teseo and Médée), Frank Zappa's 200 Motels with the Los Angeles Philharmonic and Esa-Pekka Salonen, Omaha Agrippina; collaborations with Peter Sellars in staging John Adams’ The Gospel According to the Other Mary in Los Angeles, London, Paris and Lucerne; and with Christopher Alden for the LA Philharmonic’s Mozart/Da Ponte trilogy, and more ...

Locally, Darrah made a name for himself with exceptional work on the San Francisco Symphony's Peter Grimes and Peer Gynt.

His work and his words resonate with aspirations given voice by Stephen Sondheim to Georges Seurat in Sunday in the Park with George: "Bring order to the whole. Through design. Composition. Tension. Balance."

It is balance that's the most important and challenging factor in the direction of opera — balance between keeping works fresh and staying true to their essence, balance between doing something interesting or going off into the deep end. As Darrah put it in an interview at the Everett Auditorium, which he is transforming for Don Giovanni:

I and my collaborators come from theater and other fields, not opera, none of us were really coming at opera feeling like we have to pay homage to the 1950s and 1960s "golden age of opera." We are looking for ways to activate a piece, to bring an opera to life that is both theatrically compelling and [remains true] to the text and the music. You can't do things that are overtly against them.

The music tells you what to do. With Don Giovanni, I tell the cast: I want you to think that if you were to write out the stage directions I give you, it would read like a music score.

In life we function associatively, everything flows from one to the next, it all connects — that's how stage directions should function. With that, you can explore new avenues but it's all based in the music, and you are not arbitrarily deciding to set Don Giovanni in a '40s gangster world for no reason.