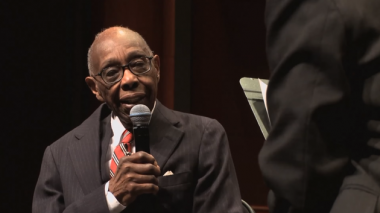 On the Death of George Walker, Great American Composer

George Walker, the most recognized African American classical composer of his generation, died at the age of 96 on August 23. With a worklist of over 100 compositions, more than 80 commissions, a Pulitzer Prize in 1998 for Lilacs, and teaching positions at the New School, Rutgers University, the University of Colorado, the Peabody Institute, Smith College, and the University of Delaware, Walker’s career was a string of firsts and mountains climbed that bear witness to an extraordinary musical mind, meticulous craftsmanship, and, of course, a strong will.

Walker was born in 1922 in Washington D.C., started piano at age five, and gave his recital debut at 14 at Howard University. He was the first black pianist to give a recital at Carnegie Hall, in 1945, and received a D.M.A. degree from the Eastman School of Music at the University of Rochester, in 1955, the first black recipient of a doctoral degree from that institution. He was then awarded a Fulbright Scholarship and a John Hay Whitney Fellowship to study composition with Nadia Boulanger as a private student at the American Academy in Paris.

Walker was stymied for a long time as a composer because of racism and prejudice. He was remarkably philosophical about those years in interviews in the following decades. Concert managers wouldn’t accept a black pianist, and he couldn’t get performances or even publication for most of his works. By the 1970s, in the wake of the Black civil rights movement, his music began to be heard more often. The National Endowment for the Arts gave a grant for the creation of his Piano Concerto, first performed by the Minnesota Orchestra at the 1975 Black Music Symposium in Minneapolis. It was a featured work at the subsequent symposia in Detroit (1976) and New York (1977). It has now been recorded by SONY with the Detroit Symphony Orchestra.

Walker’s career gradually picked up steam, which he generously suggested was an effect of the world catching up with him. That may have been true, somewhat, in terms of acceptance of a black composer, but by the time this happened, his style of midcentury modernism was disappearing from concert halls. Though his works have now been performed by most American orchestras, his music is still less frequently performed than it ought to be. Honored with many awards, from Guggenheim Fellowships to membership in the American Academy of Arts and Letters, it is hard to find him on concert programs.

Walker’s musical style does nod to and take inspiration from blues, gospel, and other black musical traditions, but the techniques are all mainstream classical and held in common with a number of tonal American composers of his era, deployed in a limpid way with plenty of room for a melody to breathe and a concision that shows the lasting influence of Boulanger. There are, as in the best composers, no wasted notes. Perhaps it doesn’t sound novel, but it is great music.

Aretha Franklin, “Queen of Soul,” Is Dead at 76

A hugely important musician has passed from the scene.

The Icelandic artist was best known for his highly regarded film scores.