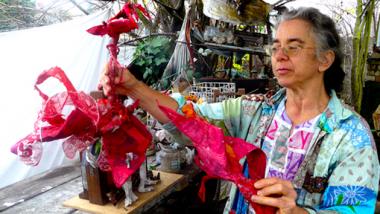 First, the rarely-performed 1885 Antonín Dvořák cantata The Spectre’s Bride (“Svatební košile”) received an acclaimed production in Berkeley, and then that performance inspired the creation of a video, which you can now see not far from Berkeley.

The Spectre’s Bride, a film by puppet-maker Francesca Borgatta, will be shown at 7 p.m., Oct. 18, at Bridge ArtSpace, 23 Maine Ave., Richmond.

It’s bargain time: The $10 admission will also get you a presentation by Borgatta, and an additional screening of The Manchurian Candidate, which, I believe, is in no way related to Czech ghost stories. For information, contact [email protected].

The video is of a wild night’s journey, told with puppets and set to Dvořák’s intensely dramatic musical ghost story. The macabre tale speaks of an undead spirit attempting to take an innocent maiden on a ghastly journey to the underworld.

When the Berkeley Community Chorus and Orchestra presented Dvořák’s work last January in Hertz Hall on the UC Berkeley Campus, music director Ming Luke told SFCV: “The Spectre’s Bride is such a fantastic work — the chorus had such a great time performing this rarely heard gem. It really needs to be performed more often.”

Among BCCO singers, Roy Nierenberg did double duty, performing and supporting Borgatta in realization of the music video idea the two had together. “The video was inspired by the BCCO production,” Nierenberg says, “she came to rehearsals, we got her the score that she used, we even proposed to have puppets appear during the production, but BCCO turned that down.” The recording used in the video is not from the Berkeley performance, which is available here.

To make her art, Francesca combines recycled objects and materials taken from nature. To begin a puppet, she joins a few elements, to examine the interplay of qualities — shape, color, and texture — inherent in their forms. If this construct appears as a segment of a face or figure, she paints on layers of glue, adding cloth or paper to unify the surface, emphasizing aspects and adding new elements to explain its nature.

If two figures seem related, she builds a scene for their encounter. She may develop text and dialogue to explain their predicament. She seeks to involve the audience, stating a situation with which people can identify, asking them to manipulate puppets or other things, to reflect on their experience.

More about the cantata from the review of a recent recording:

The way this cast and conductor sing and play this music, they make it sound like Der Freischütz or Dvořák’s dramatic tone poems, The Noon Witch and The Water Goblin. …

The plot ... concerns a young woman whose bridegroom has gone far away. How far he has gone becomes apparent when he returns as a dead ghost, beckoning her to follow him so he can consummate their marriage before daybreak.

She follows him with fear in her heart, asking him questions but receiving no answers. The dead groom demands her prayer-book and rosary, which he hurls far away from them. They approach a graveyard behind a church; her groom has thrown her wedding dress over the wall and now asks her to jump over it herself. She refuses to do so, but this doesn’t stop the dead man from vaulting the wall and demanding admission to the house, which is surrounded by ghosts who ask a corpse laid out there to get up and answer the door.

The girl again prays. In the village a rooster crows, announcing the dawn; the ghost of the bridegroom disappears as churchgoers stand in surprise before an open grave, the now torn wedding dress next to the frightened woman. They learn of her story and praise her actions. 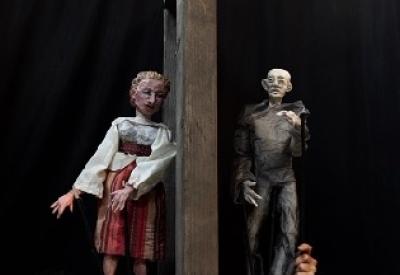 The Spectre's Bride film with puppets and sets

A tour through the conductor’s calendar reveals a dizzying roster of impressive commitments.