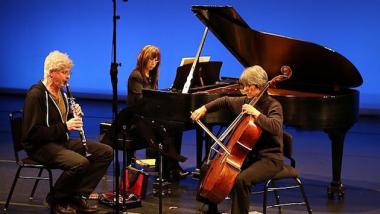 Seldom does an organization, especially a small one, have as varied — and important — news to share as San Francisco’s Earplay New Chamber Music, now in alliance with another champion of new music, West Edge Opera. To wit:

About to embark on its 33rd season, Earplay was founded by a consortium of composers and musicians dedicated to the performance of new chamber music. Since 1985, Earplay has performed 608 works by 333 composers, including 146 world premieres and 86 new works commissioned by the ensemble.

Beginning on Feb. 5, in the Wilsey Opera Center’s Atrium Theater, Earplay presents a program of 21st-century music. On the program is the world premiere of Franck Bedrossian's I’m nobody, who are you?, a piece described as a disarming combination of bass flute, contrabass clarinet, and viola. Richard Festinger’s contribution is the song cycle Coming of Age, to text by the late Denis Johnson, performed by the full Earplay ensemble, conducted by Chun, and featuring soprano Nikki Einfeld. Three Whistler Miniatures by Helen Grimes rounds out the bill.

The season’s third concert will switch to Herbst Theater on April 30. The program includes Turgut Erçetin’s Resonances (b): Tella for clarinet, violin, viola, and cello; Festinger’s The Way Things Go for flute and piano; Pablo Ortiz’s and all the phonies go mad with joy for violin, viola, and cello; world premieres of Mark Winges’s Night-Voiced for viola and piano, and an as-yet untitled work by Jon Yu for clarinet and violin.

Meanwhile, Earplay partners with West Edge in the new edition of Snapshot, a fascinating program of excerpts from new, previously unproduced operas by West Coast composers and librettists.

The scene from Rosen’s Death of a Playboy, with libretto by the composer, is right off recent headlines about a clash threatening to disrupt Hugh Hefner’s funeral. It is conducted by Chun, and features Julia Hathaway, Molly Mahoney, Darron Flagg, and Jason Sarten.

Excerpts from Saxon’s 452 Jamestown Place, which again has a libretto by the composer, will be conducted by Jonathan Khuner. The story is of a young woman who terrifies her boyfriend with outbursts from multiple personalities; the singers are Heidi Moss and Sarten.

Moss is featured again in London’s Dynamo, along with Jacob Thompson, Flagg and Sarten. Next is Wold’s She Who is Alive, with Mahoney and J Raymond Meyers. The setting for Wold’s opera, with libretto by Robert Harris, is a futuristic empire, where a warlord is dealing with a dissident, female, scientist prisoner.

Finally, there is Deaconoff’s The Last Tycoon, with libretto adapted by David Yezzi from F. Scott Fitzgerald’s unfinished novel, which was presented in a workshop performance at West Bay Opera in 2011. It will be conducted by Chun, with Julia Hathaway, Meyers, Thompson, and Sarten.

“It’s a tremendous value to opera composers and librettists to have a forum like Snapshot where they can flex their craft in real professional practice,” Chun says. “I love the artistic and technical work there for its collaborative nature amongst singers, instrumentalists, composers, librettists, conductor — and also audience with the Q&A talkback after the show.”

When Chun is not conducting here, in Slovakia, Texas, or elsewhere, she is off to China, where she is heading a successful project to bring Broadway musicals to audiences unfamiliar with the genre.

Chun’s next project is the Rodgers & Hammerstein Cinderella in Mandarin, produced in Shanghai in May.

Four years ago, Chun became the first American music director to be invited to China to premiere Mandarin language versions of Broadway hits such as Avenue Q, How to Succeed in Business Without Really Trying, and most recently, Man of La Mancha in Beijing and Shanghai. Avenue Q ran for months in both cities before going on a 50-city national tour.

You can hear music from previous Earplay offerings at their site for licensed audio links: http://www.earplay.org/www/media.php