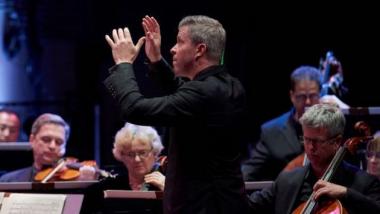 “We knew SFCM’s next music director would need to have a rare combination of qualities,” said SF Conservatory President David Stull. “Essentially, we sought an architect for the ensemble of the future — someone with both a truly innovative mindset and extensive experience working with top-tier ensembles. After a two-year search, we have found this leader in Edwin Outwater.” Outwater succeeds Eric Dudley, who became the music director of San Francisco Contemporary Music Players.

Michael Tilson Thomas, who worked with Outwater for many years, has called him “One of the most innovative conductors on the scene today.”

For Outwater, who turned 49 on Sunday, this is a homecoming to the city: “Even though I’ve lived in Chicago for over 10 years, San Francisco still feels like my musical, artistic, and personal home base.”

The San Francisco Symphony’s former resident conductor (2001–2006) and SFS Youth Orchestra music director arrived in the city just before 9/11, and participated with MTT in the preparation, performances, and recording of an unforgettable Mahler Sixth Symphony experience.

In 2004, Outwater led the SFS Youth Orchestra on a European tour, where the orchestra made debuts at Vienna’s Musikverein and Paris’ Théâtre des Champs-Élysées, and returned to Amsterdam’s Concertgebouw. He later also served as SFS director of summer concerts (2014–2017), and more recently, he had a key role in the SoundBox concert series.

But Outwater’s memories of the city go a long way before that dramatic 2001 arrival:

Though I’m from Santa Monica, my history with San Francisco goes back to childhood — we made family trips up to the Fairmont and stayed in huge suites that were given to my grandmother, who was Ella Fitzgerald’s personal manager.

“So my first memories are running around that magical hotel, and visiting the Tonga Room in particular. It was a magical city to visit as a child and has been my whole life. Lots of visits with my friends who lived here in the ’90s, and I had some wonderful interactions with André Previn and David Robertson during those times.”

Outwater sees a bright future as well, after “wonderful meetings and interactions” with incoming SFS Music Director Esa-Pekka Salonen. Elsewhere, he continues an active role as the Music Director Laureate of the Kitchener-Waterloo Symphony in Ontario, and expects to have guest conducting stints as “I’ve had lots of long, steady relationships with orchestras like the Chicago Symphony, New World, and others.”

The projects that he is asked to work on, according to Outwater, “are almost always right up my alley, and it’s nice that my eclectic and quirky style is being recognized more and more. I’ve stayed steady and true to myself and learned a lot along the way, and I feel like I’m hitting my stride.”

He has worked with the Conservatory a few times in the early 2000s, and three programs more recently, in addition to judging student competitions. Besides conducting and teaching, he envisions “a role in shaping the musical direction of the place as a whole and connecting the various large ensembles even more.

“There’s clearly a large conceptual part of this job, and the question I’m asking myself is, ‘How does an institution like this evolve quickly in these rapidly changing times, while keeping the great artisanal teaching tradition of music alive?’ How do we move this tradition into the future?”

His best musical memories, according to Outwater, involve education and learning. “I’m very honored to have the opportunity to create these experiences for others. I want to be an educator who makes a difference. I feel so much gratitude towards my teachers, and have seen what indelible legacies great educators, like MTT, can leave, it’s an incredible opportunity to have.”

The Conservatory announcement of his appointment names him music director, and according to Stull, that includes duties in addition to conducting the orchestra and selecting its personnel:

He also curates our contemporary music division, works with Historical Performance and the Opera Departments on large scale projects, identifies guest conductors (for all ensembles including the orchestra), coaches students, and works with the Associate Dean for Artistic Programming (Hank Mau) in crafting a season. He occasionally will teach a seminar and he runs the conducting program which comprises 2-4 students. Edwin will also lead a discussion that selects our artistic/academic theme for the year, which is part of an initiative we refer to as “Connected Learning.”

Filling in for an injured Joana Carneiro, Edwin Outwater’s arrival at the Berkeley Symphony didn’t just save the day, his vigorous and focused approach effected an outstanding set of performances.

At SoundBox, Come for the Music, Stay for the Atmosphere