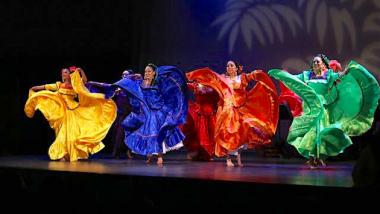 Just translating the title of Ensambles Ballet Folklórico de San Francisco’s 25th anniversary show — “Xichulense Yo Soy” — is not enough. The subject of the show on Oct. 6 and 7 in Cowell Theater needs explanation.

Xichulense, pronounced sheech-ulansay, means someone from Xichu, and the more familiar yo soy is “I am.” The anniversary show is a celebration of the Xichulense, the indigenous people of the mountainous region in the Mexican state of Guanajuato.

Ensambles Artistic Director Zenón Barrón says the purpose of the company’s spectacular display of dances and costumes is to focus on Xichu, while also bringing to the stage various aspects of Mexican social life.

Barrón, who danced with the famed Ballet Folklórico de Mexico de Amalia Hernandez, was born in Xichu, and he is evoking his childhood in Guanajuato to pay homage to its two major regions, the “ranchos” of the high sierra mountains and the pueblos of the lower valley plains.

The show uses live music from Vinic-Kay, an experimental folkloric music ensemble led by José  Roberto Hernandez. Included in the show are songs by José Alfredo Jiménez (1926–1973), one of the most important Mexican artists, whose music and lyrics inspired Barrón and many others.

Ensambles was founded in 1992 to advance understanding and appreciation of Mexico’s rich folkloric traditions. Since its inception, the company has been dedicated to that goal with performances, workshops, and lectures. Among the company’s repertoire are dances from Tabasco, Veracruz, Michoacan, Oaxaca, and other regions.

The group comprises 32 dancers, ranging from high-school students with little dance experience to seasoned dance professionals who have been with Ensambles for over 20 years. Some have been directors or principal dancers within other folkloric groups while others transitioned to the company from the Ensambles Dance Academy in their early teen years.

Ensambles has performed in many venues through the years, including appearances in the San Francisco Ethnic Dance Festival.

The 40th edition spans the globe with dance from the frozen North to East Asia.