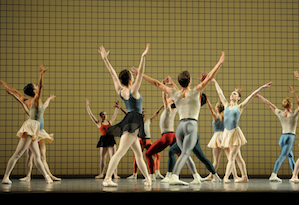 The San Francisco Ballet's last two programs of the season gave Philip Glass a new boost, in my estimation, compositions long-handicapped by endless repetitions of microscopic modulations. Yes, I have always appreciated his early short pieces, the rolling waves of the soundtrack for Mishima, much of the "Cocteau operas," and others in his amazingly large output, but too many of his works sound too much alike.

So, at the Ballet, something familiar and something new from the Glass oeuvre, all to the good. In Program 8, Jerome Robbins' inspired choices for Glass Pieces: the throbbing "Rubric" opening movement; the hushed, lyrical "Facade" for the second; and the Akhnaten excerpt — to give an idea, here's the first act of the opera.

Under Martin West's direction, the Ballet Orchestra followed its fine work in Stravinsky's still-startling, mercilessly 12-tone Agon and the Schoenberg orchestration of Brahms in the Brahms-Schoenberg Quartet with a splendid performance of Glass at the Saturday matinee.

In Program 7, Glass' Tirol Concerto for Piano and Orchestra was used wisely and well by Liam Scarlett for his terrific Hummingbird.

The music — conducted by West and featuring the brilliant pianist Brenda Tom Vahur — is melodious, interesting, and the second movement has great lyrical beauty.

In an excellent performance of Helgi Tomasson's The Fifth Season on Wednesday, concertmaster Roy Malan (in his 39th and final year with the orchestra) shone in violin solos of Karl Jenkins' score.

Tirol Concerto pianist Brenda Tom — her professional name — has just published a CD of Howard Hersh's Angels and Watermarks. The harpsichord suite was composed in 2004 at the Djerassi Resident Artists Program. Its title comes from a story by Henry Miller, in which he continually alters a painting until he discovers an angel, his watermark that was waiting to be revealed.