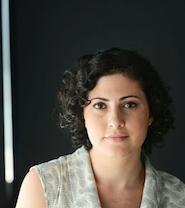 Omer Ben-Seadia's judicious and effective direction of the Merola Grand Finale on Saturday marked a burgeoning talent in an artist with an unusual background, including military service. When asked about possible challenge from peers when she directed opera at the Cincinnati Conservary, she quipped that there's never any question about who's in charge, "that’s where my Israeli army experience comes in.”

But word from singers in San Francisco is that in her work, she is far from a drill sargeant. James Darrah, whom Ben-Seadia assisted in the direction of Don Giovanni, praised her and said of the Finale: "I'm glad to hear she did well with what's quite a difficult assignment." Jose Maria Condemi, director of the Merola's A Streetcar Named Desire, said: "I gladly concurred with James' assessment on Omer. She is a talented young director whom I have just engaged to direct Italiana in Algeri at my company, Opera Santa Barbara.

This Spring, as she completed her studies in Cincinnati, Ben-Seadia was profiled in CityBeat.com:

“To actually do the thing you’re supposed to be doing is such a great adventure,” she says.

It’s been more than a decade since a CCM grad student staged a large-scale production in one of CCM’s main venues. Since beginning the artist diploma program in 2012, Ben-Seadia has worked on more than a dozen projects with CCM, Cincinnati Opera, the Vocal Arts Ensemble and the Cincinnati Boy Choir, in addition to her tenure on the staff of the New Israeli Opera in her native Tel Aviv.

... Born into a family of actors and writers, Ben-Seadia grew up in Tel Aviv, where her mother is an actor and her father writes, directs and performs fringe theater. When Ben-Seadia was 15, she was tapped by a youth theater company and when the New Israeli Opera cast her in a non-singing role in Gioachino Rossini’s The Barber of Seville, she says she was smitten. “In opera, I found this enormous repertoire that allows for extraordinary expression that can’t be put into words,” she says.