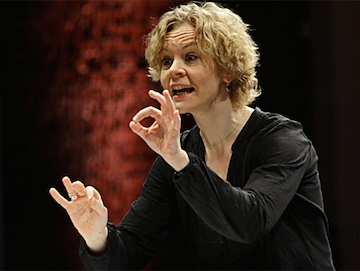 Gender Is Not an Issue for Mälkki the Conductor

Still astronomically out of balance, the number of women among conductors is slowly increasing, very slowly, and mostly not at the top: According to the League of American Orchestras at the end of last year, of the 103 ensembles with the biggest budgets, 12 have female conductors, just one of the top-tier 22 is led by a woman (Marin Alsop).

And yet, it's possible — I hope — to do this: report on a conversation with Susanna Mälkki and "bury the lead" by starting with this on top: What she is bringing to Davies Symphony Hall on Nov. 29 and 30, for her return concerts with the San Francisco Symphony.

The concerts open with Charles Griffes' rarely heard 1915 White Peacock, which Mälkki first conducted in Scotland. "I wanted to have an American work on the program," she says, "and this is a beautiful French-influenced piece with luxurious sonorities."

For the concerto, she selected Béla Bartók's 1945 Piano Concerto No. 3, one the composer's last works before his death in the same year. Mälkki says it's "more classical in language, and crystalized musically, compared with other Bartóks of the period," and also because "the first and second concertos are more difficult," although she knows the soloist could handle equally any of them.

Pianist Jeremy Denk is Musical America’s 2014 Instrumentalist of the Year, and known for his virtuoso performances.

The second part of the concert features Johannes Brahms' 1877 Symphony No. 2, one of the composer's more cheerful and pastoral works, which Mälkki has performed several times recently, including with the Los Angeles Philharmonic at concerts she calls "very successful." A Los Angeles Times review said "She etched lines with a crisp and dry sensibility ... brought out details that took the breath away."

Now, the "gender issue": Mälkki, at age 45, heads the Helsinki Philharmonic Orchestra, the major ensemble in her native Finland; she is the principal guest conductor of a Lisbon orchestra in Portugal, and she conducted opera in Milan's famed Teatro alla Scala, the first of her gender on the podium of the 236-year-old company. She was music director of the Ensemble InterContemporain, from 2006 to 2013.

Her versatility and broad repertoire have taken her to symphony and chamber orchestras, contemporary music ensembles and opera houses throughout the world. This season Mälkki debuts with The Philadelphia, Cleveland and New York Philharmonic orchestras, Chamber Orchestra of Europe and Orchestra Filarmonica del Teatro la Fenice.