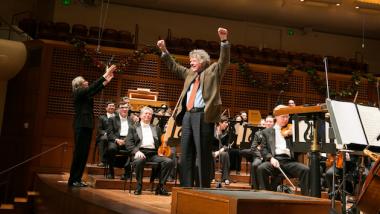 San Francisco philanthropists Gordon and Ann Getty have been giving millions of dollars to music and arts organizations, including prominent support to this publication for many years. Now, once again, there is a major arts contribution announced from the Ann & Gordon Getty Foundation: a $4.5 million grant to the League of American Orchestras’ Futures Fund.

The contribution makes it possible for the League to help orchestras invest in learning and innovation. League President and CEO Jesse Rosen thanked the Gettys “for their expanded support as the Foundation partners with us to invest in the future of America’s orchestras, prioritizing innovation and helping our member organizations to advance the art form.” The joint purpose, Rosen said, is “to navigate through this era of great change, giving us valuable opportunities to reach new audiences and build the resources we need to connect with our communities both inside and out of the concert hall.”

Ann and Gordon Getty’s support of the new League of American Orchestras initiative is but one of countless examples of the Gettys’ fervent and unwavering support for orchestral music. Gordon Getty has served on the S.F. Symphony Board of Governors for more than 25 years, and his leadership and support have allowed some of the orchestra’s most important initiatives to come to fruition, including the Grammy Award-winning Mahler cycle on SFS Media, and the acoustic renovation of Davies Symphony Hall.

We consider him a member of the San Francisco Symphony family, but his support extends well beyond our city and underscores his sincere dedication to the future and health of American orchestras. We are excited to see what kinds of new and exciting projects can be funded through this generous gift. We are, as ever, incredibly grateful for his generosity and friendship.

The new grant program initiated with the donation will offer two-year organizational grants as well as short-term technical-assistance grants. Three million dollars in grants will be available in the first cycle. U.S.-based adult and youth orchestras that are members of the League are eligible to apply.

The new program will build on and replace earlier Getty-funded and League-sponsored programs. The focus of the new, larger Futures Fund will be to support orchestras that are making significant investments in learning and innovation, and that also demonstrate potential to influence and ensure a positive future for American orchestras.

Ann & Gordon Getty Foundation Director Lisa Delan said the partnership with the League of American Orchestras helps facilitate pathways to ensure and expand the future of orchestral music in America. “We are poised at a moment of great cultural change in this country and the Foundation embraces the opportunity to explore the ways in which classical music can adapt to the shifting landscape and broaden its reach and relevance.”

The Futures Fund will award two-year organizational grants to orchestras engaged in areas including:

Earlier this year, 22 orchestras from across the United States were selected by the League to receive Getty Education and Community Investment Grants.