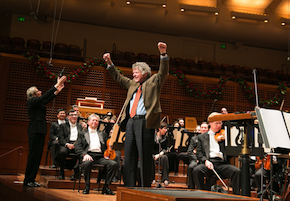 The great caricaturist Al Hirschfeld died a decade ago, but here was his portrait of Gordon Getty at the entrance to Davies Symphony Hall Monday night, looking as if drawn today. Next to the artist's signature was the number 3 — meaning that "Nina," the name of Hirschfeld's daughter is hidden in the drawing three times.

And here came Getty, walking all by himself — as he usually does — to attend the San Francisco Symphony's big gala on his 80th birthday to honor him for his many contributions to the orchestra, including the vital $9 million acoustic renovation of Davies Hall.

Appearing approachable as he always does, Getty stopped to answer my question about the drawing's vintage: It was made about 20 years ago. I didn't ask him where the Nina's are hidden, so he started walking into the lobby, stopped, came back and corrected himself: It was 15 years ago.

Then, while waiting for the elevator, Getty talked with any number of patrons approaching him, went to his seat in the orchestra (no special box for him), and only waved back to the stage when he was greeted and applauded from there, not standing, avoiding the spotlight even still.

Finally, after intermission and following the world premiere of his A Prayer for My Daughter (to a poem by Yeats), Michael Tilson Thomas coaxed Getty to the stage where he applauded the orchestra and Ragnar Bohlin's Symphony Chorus, and took a few awkward bows.

For somebody as shy and self-effacing as Getty, it must have been a mixed blessing to listen to MTT's effusive praise for "my dear friend" of many hidden talents, such as being a great expert on cylinder recordings, baseball, "omniescent about football, economics, art, and poetry ... and making it possible for us [SFS] to present the enormous range" of repertory.

Getty the composer was also represented by his Four Dickinson Songs, with soprano Lisa Delan, accompanied by Robin Sutherland, and the orchestra playing three movements of his Ancestor Suite.

Other highlights of the eclectic program were Bohlin conducting the chorus in an affecting performance of Tallis' 16th-century Spem in alium (Hope in any other) and Plácido Domingo singing "Di Provenza il mar," from La traviata.

One of the 20th century's greatest tenors, Domingo — turning 73 on Jan. 21 — now sings baritone roles and, judging by his performance of the Verdi aria tonight, does so amazingly well. The voice was powerful, filling the oversized hall, and the ovation that followed was well earned.

Domingo also sang a Lehár duet with Frederica von Stade, and conducted the orchestra in the Overture to Die Fledermaus. In an amazing display of his age-defying sustained power, Domingo sang over the combined forces of orchestra, soloists, chorus, and audience, with a flourish on the last note of "Happy Birthday" to Getty.

Flicka selected what is perhaps the shortest song in Mahler's Rückert Lieder, "Blicke mir nicht in die Lieder" (Don't look into my songs), and sang it beautifully, but as it came to a quick and sudden end, she mimicked surprise — and the audience laughed with her.

MTT and the orchestra opened and closed the gala with muscular performances of an excerpt from the Delibes ballet Sylvia at the beginning and the Allegro con brio from Beethoven's Symphony No. 7 at the end.

An article in the program pays tribute to Getty, "who for decades has occupied a place of honor at the node of the San Francisco Symphony's varied activities." It quotes Getty about the beginning of his concert attendance "when Pierre Monteux was the music director ... I was in high school and college then, and I met him — though barely."

In the years that followed, he was close to conductors and musicians of the orchestra, from Edo de Waart to MTT "with whom he feels closest," and whose Mahler cycle Getty helped to finance:

In all, the concert is a celebration of an exceptional friend, of his own creative work, of the collegiality he has nurtured through many years, and of his enduring relationship with the San Francisco Symphony.