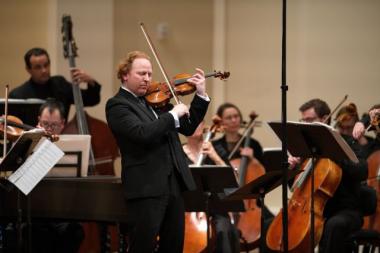 In March of this year, as the pandemic shut performances down all over the world, Daniel Hope began a series of 14 daily concerts live from his living room called [email protected].

“In these troubled times,” Hope said, “I invite artists and friends to my home in Berlin to join me for spontaneous mini-concerts (of course one after the other and keeping the required safety distance). We need to and must stay home at this time,” he said, “but we also need to share music as a source of comfort and inspiration.”

Together with its sequel — [email protected] on Tour! — the show ran to almost 70 episodes, was streamed more than eight million times, and raised tens of thousands of Euros for artists in need.

The series will be delay-streamed free at ARTE Concert, the ARTE App, ARTE Concert Facebook and WDR. All six episodes will be archived and available for viewing 30 days after the air date.

Produced by Kobalt Productions for Europe’s ARTE television network, these six episodes will be filmed in San Francisco and comprise six half-hour live musical performances. The first episode streams on Wednesday, Nov. 18 at 10 a.m. PST on the ARTE website, with subsequent episodes running at the same time daily through Monday, Nov. 23.

Hope commented on the plan: “I have had the privilege of making music in the United States for 20 years and it pains me to see such a music-loving nation practically silenced from the joy of live music making.

“As Music Director of San Francisco’s New Century Chamber Orchestra, I am concerned for the well-being of our wonderful musicians. It has been my goal for many months now to be reunited with them in some form, and to make music with them in America again. I am grateful to our board for making this journey possible, and to the ARTE TV Channel for extending the cultural hand of friendship between Europe and the U.S. by agreeing to host six special episodes of [email protected] from San Francisco.”

New Century Interim Executive Director Richard Lonsdorf said, “Since the onset of the pandemic, New Century has been navigating the daunting logistics to bring Daniel and his superb [email protected] production team from Europe to San Francisco.

“That the recent European lockdown has brought a renewed focus and urgency to our collaboration is something we never could have expected. At a time when community is more important than ever, we are delighted to be a part of this global family as we share exquisite and intimate music-making from our home for audiences all around the world to enjoy.”

Among the series highlights: Jennifer Higdon’s “Quiet Art” from Impressions, Carlos Simon’s An Elegy: A Cry From the Grave, Philip Glass’s Echorus, and George Walker’s Lyric for Strings, as well as works by Aaron Copland, Gabriela Lena Frank, Florence Price, and Kurt Weill.

Masterworks from the classic repertoire through to the contemporary also feature the music of Edward Elgar and Antonín Dvořák, Grażyna Bacewicz, and Hans Krása.

An anthology of the violinist's intimate livestream performances with special guests is a relaxed audio bouquet of comfortable standards.

The musicians capture the high energy of Beethoven’s early compositions.

An international ensemble tracks the multiple influences shaping music in the royal courts of Europe.