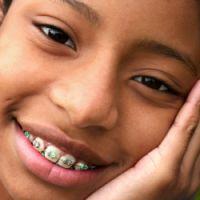 How Can Wind Players Deal with Braces?

The news that your child needs braces can be a big, well, adjustment for both parents and the child. And if they play a wind instrument, questions arise about how a mouth full of metal will affect tone, articulation, and comfort while playing and practicing.

A study by the Journal of Clinical Orthodontics stated that there is a period of adjustment for all instrumentalists, with the high brass and flutists taking the longest time to get used to their braces: an average of two months. Reed players seemed to have an easier time with braces in general. It¹s just a fact that students will have to learn to reform their embouchure (the way they position their mouth) with the added hardware involved.

Teachers agree that playing with a correct embouchure that does not use too much pressure, helps. "The most successful trumpeters don't push the horn up against the teeth, but instead have a flexible 'buzz' in the lips out front," says Scott Weigum, trumpet teacher in San Francisco. Flutist Esther Landau affirms this, however says that students with thinner lips may have more trouble. She says: "When a flutist gets braces, it is like they have just been given a completely different mouth. Some people can adapt quickly to the new topography; others become so frustrated that they end up quitting. Usually, though, if the student can get through the first two to three weeks without wanting to throw in the towel, they will be able to play well enough that they won't get discouraged."

The JCO study states that the most common physical aid recommended by Orthodontists is applying wax to the brackets if they tend to cut into the cheeks or lips. Landau gives another tip: "Flutists should definitely take out retainers when playing, and also the little rubber bands that connect top and bottom braces. The best thing about braces for flute players is how amazing it will feel — and sound — when they come off!"