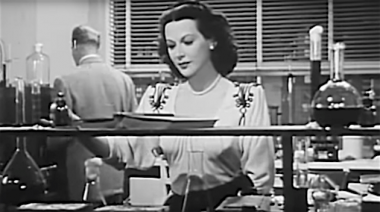 You can see Bombshell: The Hedy Lamarr Story now, months ahead of its commercial release, when it’s screened in the Castro Theater at 8 p.m. Sunday evening, closing the 37th S.F. Jewish Film Festival. (The film will also be shown on Aug. 5 at the Albany Twin, and on Aug. 6 at the Smith Rafael Film Center.)

With “O don fatale” (O terrible gift), the Princess Eboli cursed her beauty in Verdi’s Don Carlo. Hedy Lamarr had her own acid epigram about beauty: “Any girl can look glamorous, all she has to do is stand still and look stupid.” The quote opens Alexandra Dean’s Bombshell, a fascinating documentary about how the Hollywood star and the “bad boy of music,” composer George Antheil, invented — seven decades ago — the technology that makes cellphones, Wi-Fi, and GPS possible today.

Lamarr, a Jewish refugee from Vienna also fleeing a bad, teenage marriage, became a “sloe-eyed Hollywood siren,” starring in White Cargo and Ziegfeld Girl. Wanting to help end the deadly reign of Nazi U-boats in the Atlantic, she developed a program of frequency-hopping, secret communications that helped guide torpedoes to their targets.

“Inventing was her hobby” says Dean. “She had this incredible faith in her ability to come up with bold new ways to improve the world. Frequency-hopping was probably the most exciting invention she ever dreamed up. But she didn’t know how to make it into a mechanical reality. That’s why she started to collaborate with Antheil.”

Lamarr met the composer at a party, wrote her phone number with a lipstick on his car window, and the two became fast friends and collaborators. Antheil helped with the mechanics, using his experience synchronizing 16 player pianos for his Ballet Mècanique. Neither had any science education, but they were amateur geniuses, coming up with a world-changing invention.

The Navy, in desperate need of exactly what Lamarr and Antheil offered, couldn’t deal with the nonsensical idea of “the world’s most beautiful girl” offering such an invention, so they thanked and dismissed the pair, and filed away the patent for decades before it was rediscovered and developed. Antheil dropped out, Lamarr went back to stardom and fame, but she also raised $25 million worth of war bonds — an incredible half-a-billion dollars today.

Antheil is described in the film by Michael Tilson Thomas as a wonderful composer “whose music sometimes sounds like jazz put in a Cuisinart.” Charles Amirkhanian, of Other Minds, talks about the significance of Antheil’s unique contributions to contemporary music, which he once described in an interview:

One of the things that I like so much about the Ballet Mécanique is that it was written by a 24-year-old American kid from Trenton who was living in Paris. It was probably the most radical piece written to that date in western classical music in that it used the kind of Stravinskian ideas of displaced accents and unexpected syncopations in combination with the wild orchestration, which involved not only a player piano and live pianists, but also a big battery of percussion: bass drums, gongs, cymbals, sirens, doorbells, and, did I say airplane propellers? Well, they were there too.

As the festival blurb asks, “What are the chances that the hottest pinup babe of the 1930s was also a genius who foresaw Wi-Fi, Bluetooth, and cellphone technology?” This is a fascinating part of Bombshell, but the film is much more, a great, in-depth portrait of an exceptional life, full of surprises — a collaboration with Howard Hughes, for example.

From age 5, when Hedwig Kiesler took a music box apart and then put it back together, to the sensational/notorious nude scene in Ecstasy before she turned 20, to turning down a $125 per week offer from Louis B. Mayer of MGM (who changed her name to Lamarr), only to be hired by Mayer for $500 a week ... it’s a dizzying journey of a career that sounds like fiction, but was all too real, as summed up in a Google Doodle on her 101st birthday. (She died in 2000, aged 85.)

Dean, the film’s producer and director, substantiates that reality with star-studded film clips and illuminating contributions from Lamarr’s adult children and a surprising lineup of commentators — most memorably that of Lamarr’s greatest, hilarously smitten fan, Mel Brooks.

Brooks, who created the character “Hedley Lamarr” in Blazing Saddles, said later — with apparent sincerity — that he was flattered by Lamarr suing him over the use of the name. Any attention from his idol was welcome, as are the adventures of Lamarr for Bombshell audiences.