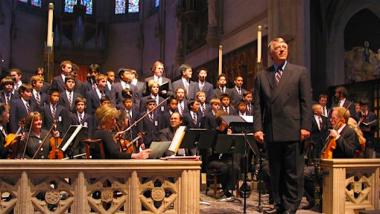 In the middle of rehearsing the San Francisco Opera Chorus in Britten’s “chorus-intensive” Billy Budd, which opens in a few days, Ian Robertson paused briefly to answer the question why he is leaving his “other job” of leading the fabled San Francisco Boys Chorus:

“I’m leaving SFBC after 23 years because it’s time for new faces and energy. I look forward to working closely with the new leader at the SFBC, the very talented Eric Choate.”

Choate is a conductor, composer, and organist, who has served as a guest chorus master for the SF Symphony and the Berkeley Symphony. Since 2014, he has been on the faculty of the SF Conservatory of Music as assistant director of the Conservatory Chorus, which in 2016 collaborated with Esa-Pekka Salonen and the Philharmonia Orchestra for performances of Stravinsky’s Oedipus Rex and Symphony of Psalms.

Founded in 1948 as the first boys’ repertory chorus in the nation, SFBC has won Grammy awards and was a US Presidential Inauguration Guest. It has some 230 members, most in San Francisco, but with additional campuses in Oakland, San Mateo, and San Rafael. It is known as “San Francisco’s Singing Ambassadors to the World.”

The group was founded by Madi Bacon and SF Opera founder Gaetano Merola to provide singers for the San Francisco Opera. Robertson says he “knew Madi in her last years, she came to many of my early concerts with the SFBC.” Born in 1906, Bacon died in 2001.

What were some of the high points of Robertson’s long stretch of time, almost a quarter century, with the Boys Chorus?

Guest performers, the Obama Inauguration in January 2009, singing on the National Mall in 15-degree windchill, thinking how these kids will never forget this experience in so many ways.

Also, showing up in Rome’s St Peter’s Basilica to sing a prearranged program to discover they had changed the songs but nobody told us.

Perfecting the art of getting 34 kids with suitcases on and off Shinkansen trains in 30 seconds in Tokyo...

Robertson, SFO chorus director for 32 years, prepared the singers for more than 300 productions, including the humongous Les Troyens, has conducted Lady Macbeth of Mtsensk, Falstaff, La Perichole, Così fan tutte, and Merola Grand Finale concerts, among others. He has been awarded the prestigious San Francisco Opera Medal (2012) and the Olivier Messiaen Foundation Prize for Saint François d’Assise (2003).

He is working on an SF Opera season that uses the chorus extensively, in Romeo and Juliet, Billy Budd, The Marriage of Figaro, Manon Lescaut, Hansel and Gretel (children’s chorus), Ernani, and The (R)evolution of Steve Jobs. How has he handled the SFO/SFBC double duty?

I had been in charge of the opera chorus long before I took over the SFBC, but I always had an interest in youth music. I was Artistic Director of the Scottish Youth Theatre in Scotland before I came to San Francisco. So I wanted to be more involved in the training and background of the children who would appear on stage with the SF Opera Chorus. It’s a very natural fit if you can work it into your thinking and schedule.

Opera chorus masters usually just want to hire an external group of kids all ready to go. Well, I wanted to work more closely with a group in the community and that turned out to be the SFBC — already working with the Opera.

Getting to know these kids from all backgrounds made it all the more interesting to me. Hopefully, as the leader of the SFBC I was able to show these kids that there are many outlets for musical creativity, like singing opera, singing concerts [all over the world], singing at ball games, and at public events. The kids become more rounded, and thus fill out their characters on stage in so many ways.

Let's Hear It for the S.F. Boys Chorus