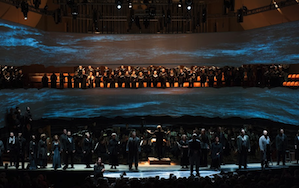 Impressions of a Memorable Grimes

The last performance San Francisco Symphony's season-closing semi-staged production of Britten's Peter Grimes on Sunday felt different from the first on Thursday, but it was equally magnificent, and just as overwhelming. It even made a veteran supernumerary fall in love with the opera all over again.

On Thursday, it was an explosion of raw feeling, a stunning surprise, a successful Hail-Mary pass through the complexities and difficulties of one of the 20th century's great scores — a surprise, even against high expectations. On Sunday — after four consecutive performances for the orchestra, three for soloists and chorus — the question was if the wonder of it all could be sustained, and the answer was yes.

The physical, athletic endurance alone was so impressive. Stuart Skelton sang Grimes, a role he now owns as Jon Vickers once did, at the English National Opera, with several days of rest between performances. He followed an inhuman schedule of Thursday-Friday-Sunday, all in full voice, resounding in Davies Symphony Hall with a sound few singers can produce. A long-ago recital by Montserrat Caballe comes to mind, and closer at hand, Elza van den Heever's Wagnerian-lyrical Ellen Orford. The English National Opera, by the way, staged the world premiere of Peter Grimes in 1945.

Also, what I noticed only peripherally at the first performance became fully obvious by Sunday: direction and the management of projections were restrained, superb — the very opposite of Regieoper or "director's opera."

Although the stage above the orchestra and singers is dominated by what director James Darrah described as "a very large, panoramic projection screen that starts at floor level and wraps around the orchestra in a semi-circle — it goes up into the air and breaks open where the chorus is, and then continues up like a big curved sail," it didn't divert attention by being overused.

Thanks to Darrah and video designer Adam Larsen, the beauty of this panoramic screen was that it did not intrude. There were faint images of the town and, mostly, of the sea, but these disciplined, thoughtful artists refrained from what most people would do with an expensive toy — and call attention away from what is important.

San Francisco Opera, which had planned "Grimes" for the Britten centennial but couldn't afford it, had an excellent production under the baton of Donald Runnicles.

And here is the bad news: SFS has incongruously opted out of recording or broadcasting, so these performances can never be heard again. Still trying to find out why.