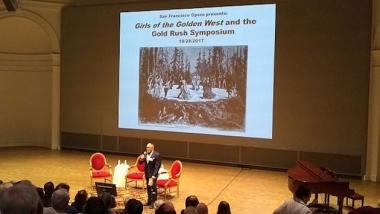 The “CNN opera” moniker once applied to John Adams’s works has validity. His operas, especially those in collaboration with Peter Sellars, deal with recent history and reflect issues, problems, hopes of the present — these are operas that remain timely and relevant. Nixon in China and Doctor Atomic are prime examples.

The next Adams-Sellars opus, Girls of the Golden West, is set in the mid-19th century California Gold Rush, but the distance in time doesn’t attenuate its multiple points of relevance. At an introductory event Saturday to the San Francisco world premiere of the opera, Adams and Sellars were the first speakers in the Wilsey Opera Center’s Atrium Theater during a seven-hour symposium on the opera and the Gold Rush.

Adams immediately brought the discussion to the present, saying that he is “responding to the imponderable chasm we encounter today but also realizing that our history had much worse periods than this.” And yet, now and before, Adams said, a special characteristic of the country is that Americans exhibit humor and optimism even at the worst of times.

The worst and the best were prominently present at the time and in the setting of the opera, fortunes being made overnight in the midst of hardship, squalor, deprivation. A central figure in the opera, an eyewitness chronicler of the Gold Rush who called herself Dame Shirley, wrote in her letters (used copiously by the opera’s libretto), there were “murders, fearful accidents, bloody deaths, a mob, whippings, a hanging, an attempt at suicide, a fatal duel, and bars lined with that eternal crimson calico which flushes the whole social life of the Golden State.”

From James Marshall’s discovery of gold in on Jan. 24, 1848, at Coloma on the American River, through the apex of the Gold Rush in 1852, history and Sellars’s documentation-based libretto teem with dramatic conflicts between people and nature, the need for community versus the rift between ethnic groups, the shamefully neglected issue of the coincidental genocide that decimated Native Americans — destroying their environment and sanctioning their killings.

There were, at times, fatal bouts of discrimination and oppression against women (who were mostly relegated to prostitution), escaped and freed slaves from the South (this is just a decade before the Civil War), Hispanics (including Mexicans in a land just ceded by Mexico with the 1848 Treaty of Guadalupe Hidalgo), thousands of Chinese immigrants, and so on. Vital connections between then and now, the symposium established, include the bubble economy of gold mining and the impact on the environment.

A prominent visual reminder of the environmental destruction is featured as a platform on the set of Girls of the Golden West: the enormous stump of the gigantic, thousand-year-old redwood cut down by gold-rush speculators in Calaveras County — “a calamity without any reason,” said historian Christopher O’Sullivan at the symposium.

Dame Shirley summed it all up: “You have no idea of this wild and barbarous life.” The public at large doesn’t, but Adams and Sellars have spent a great deal of time with research and they populated the opera with mostly historical characters, who also represent archetypes of the era in the midst of the global rush to the Sierra Nevada, tens of thousands pulled by the gold, and pushed by famines in Ireland and China, revolutions and disorder in Central Europe, upheavals and poverty in Central and South America. The Gold Rush caused the population in the area to explode from 14,000 to almost 400,000, with San Francisco expanding from 850 people in 1848 to 36,000 in just four years.“I intend to be as disagreeably statistical and as praiseworthily matter-of-factish as the most dogged utilitarian could desire. I shall give you a full, true, and particular account of the discovery, rise, and progress of this place.” — Dame Shirley, whose Gold Rush letters are used in the opera’s libretto

Dame Shirley (Julia Bullock) is front and center, along with Ah Sing (Hye Jung Lee), a Chinese immigrant, who works as a prostitute but dreams of a better life. Ned Peters (Davóne Tines) is a cowboy and former slave. Josefa Segovia (J’Nai Bridges) is a young Mexican barmaid whose act of self-defense condemns her to become the only woman in California history to be executed in circumstances closely resembling a lynching.

Against the vast, messy richness of the story, how could “Puccini’s version,” the 1910 Girl (singular) of the Golden West, be so pretty-blank-romantic, without any realism? Sellars reminded the audience that David Belasco, whose play served as the basis of Puccini’s libretto (by Guelfo Civinini and Carlo Zangarini), was born in Sacramento, was well familiar with California history, and “knew better.” The simple reason, Sellars said, for the opera becoming “popcorn and cardboard” is that the “East Coast vision” was concerned only with the commercial success associated with the gold frenzy. Girls, Sellars said, will be “the first Californian opera.”

Theatre Comique, co-directed by Corey Jamason and Eric Davis, provided a musical history of the period, with performances by tenor James Hogan and baritone Radames Gil with Jamason at the piano.

San Francisco gets the opera’s formal world premiere in November.

Director Peter Sellars, now 54, can still be occasionally controversial, but as he explains in this interview, provocation is at the heart of his conception of theater. Here is insight on the mix of arts and politics.