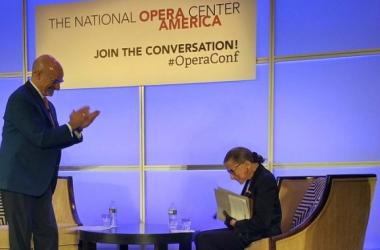 Ginsburg was among speakers at the conference, which is hosted by Washington National Opera

Front row for Justice Ruth Bader Ginsburg's talk at the Opera America Conference. Not only was she regally elegant and disarmingly charming, it turns out she has an encyclopedic knowledge of opera and is especially interested in new operas by American composers.

Making eye contact with her felt a little like sticking your finger in an electrical socket - her warmth and energy were palpable. She's a real national treasure."

Streshinsky concurred: "Having attended five previous conferences, this year stood out as our new board member, James Parr, and I learned an enormous amount about the opera business and best practices. The pinnacle of the conference was that James and I were in the front row to hear Justice Ruth Bader Ginsburg speak about her love for opera. An experience I will never forget.”

In a talk given at the Castleton Festival in Virginia last year, according a report in the Wall Street Journal, Ginsburg said Madame Butterfly stood for contract law, in that Pinkerton’s 999-year lease of a Nagasaki house includes the services of the titular geisha; Carmen illuminated criminal law, as in the Gypsy siren’s "plea bargain," for Don Jose to avoid jail. And from the Gilbert & Sullivan Iolanthe, Ginsburg introduced the Lord Chancellor, a walking “violation of separation of powers.”

Composer and former law student Derrick Wang has used the two Justices' devotion to opera for the subject of an opera, Scalia/Ginsburg, which will be presented in a preview on May 13 in Stanford's Dinkelspiel Auditorium. The opera will have its world premiere at the Castleton Festival in July; Ginsburg is expected to give a talk at the festival on the day of the premiere.