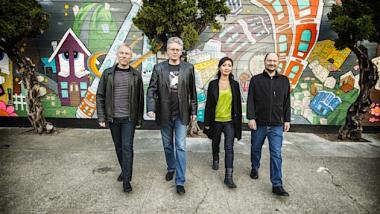 The lineup has just been announced for the 2018 San Francisco International Film Festival, held in San Francisco, Oakland, and Berkeley, April 4–17.

Founded in 1957, one of the world’s oldest and largest film festivals, SFFILM (no longer using the acronym of SFIFF) will feature a dozen music-related films among the festival’s 183 movie presentations. Of special interest is A Thousand Thoughts, a “live documentary” by the Kronos Quartet, San Francisco’s acclaimed ensemble, about itself and its work.

Featuring a live performance by the Kronos in the Castro Theater on April 10, A Thousand Thoughts is a multiscreen film by director Sam Green and film editor Joe Bini, partnering with the musicians to tell their story of more than four decades circling the globe. Green will narrate from the stage while the film shows archival footage and interviews with longtime collaborators such as Philip Glass, Terry Riley, and Laurie Anderson.

“Live scorings of conventional films can feel like an unwieldy compromise, a concert periodically interrupted by dialogue and sound effects,” says composer Sam Adams, “but in A Thousand Thoughts, the interplay and overlap is its reason for being.

“The ideas that normally underlay the quartet’s music are moved to the front, existing in counterpoint with the music itself. Composer Aleksandra Vrebalov, whose Sea Ranch Songs was performed in excerpt, observed in an interview clip that talking about music is ‘like trying to describe a perfume,’ but that ephemeral quality was embodied in the interaction between image and sound, notes and words.”

Other festival films about music:

Matangi / Maya / M.I.A., Sri Lanka / UK / USA, directed by Stephen Loveridge — Sri Lanka / UK / USA — Told mostly with footage that she herself shot, the film follows the genre-busting singer from her teenage years in London to her controversial Super Bowl performance and beyond, revealing how her struggles with fame and fortune lie alongside her unfaltering commitment to bring political awareness to her home country of Sri Lanka. (April 6 and 17, Roxie Theater; April 10, Grand Lake Theater)

How to Talk to Girls at Parties, UK, directed by John Cameron Mitchell — Punk rock 1970s alien invasion film featuring coming-of-age romance punctuated by “adult content.” Elle Fanning as the loveliest of all alien life forms and an outrageous Nicole Kidman as a foul-mouthed Vivienne Westwood-ish club queen lead the cast in this wild ride through sci-fi master Neil Gaiman’s adaptation of his most impossibly fun and impish short story. (April 6, Castro)

Blonde Redhead with I was Born, But..., Japan, directed by Yasujirô Ozu — Kazu Makino, Amedeo Pace, and Simone Pace formed the band in New York in the mid-’90s and have created nine albums, the second of which, La Mia Vita Violenta, is dedicated to Pasolini, and the most recent, Masculin Féminin, references Godard. (April 11, Castro)

Deep Astronomy and the Romantic Sciences, US, Writer/director/composer and San Francisco cult icon Cory McAbee’s (American Astronaut) new performance-art project follows the story of a singing motivational speaker who travels the world urging people “to give up their goals, stop reaching for the stars, and start looking for the stars within their own minds.” McAbee performs songs from his Small Star Seminar album, including “I Was Once Like You,” “They Pump It Up,” and “Trust Me.” (April 13, Victoria Theater)

Bad Reputation, U.S., directed by Kevin Kerslake, is a documentary about Joan Jett, “godmother of punk,” with the participation of Iggy Pop, Blondie, Kenny Laguna, and her Blackhearts.

The San Francisco Girls Chorus will join Kronos for Iranian-American composer Sahba Aminikia’s piece, which blends recordings from the 30s with sound clips from modern-day Iran.