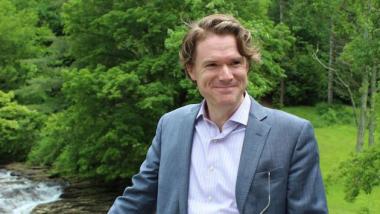 Los Angeles Chamber Orchestra has named its new executive director: Ben Cadwallader, who joins the group after having led the Vermont Symphony Orchestra in the same role for the last four years.

Cadwallader’s resume includes stints at the Los Angeles Philharmonic, where he served as education programs manager from 2012 to 2015 and managed the Composer Fellowship Program, the Youth Orchestras of San Antonio, and the East Coast Chamber Orchestra. In 2017, he was one of nine arts administrators from across the country selected by the League of American Orchestras for its Emerging Leaders Program.

In his prepared statement, Cadwallader said, “I have long admired LACO’s steadfast commitment to musical excellence and new music as well as its ability to experiment and adapt within a changing media landscape. I’ve been captivated by the pure beam of effervescent and profoundly charismatic musical brilliance that is Jaime Martín, with whom I share a passion for inclusion, education, and innovation. Working in partnership with him and LACO’s stellar artists to bring their vision for the Orchestra to life will be a joy personally and professionally. While I’m genuinely saddened to close my chapter in Vermont, the remarkable people affiliated with LACO have welcomed me with open arms, and I’m excited to get to work there.”

Cadwallader takes over an organization flush with recent success, and which has just experienced a change in artistic leadership, with Jaime Martín taking over musical direction last year, from Jeffrey Kahane.

Missy Mazzoli, Jaime Martín, and the LACO turn toward previous centuries at Royce.