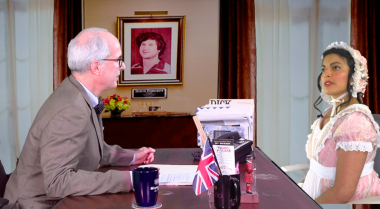 Lamplighters Present the Very Model of a Modern COVID-19 Gala

Since the 1870s, Gilbert & Sullivan faithful Over There have sung and laughed through the Great Blizzard of 1891; two world wars; the Russian and Spanish flu; the sinking of RMS Titanic, HMS Victoria, and RMS Lusitania; the Great Smog of London; the 1953 Storm Surge, Margaret Thatcher, and worse. 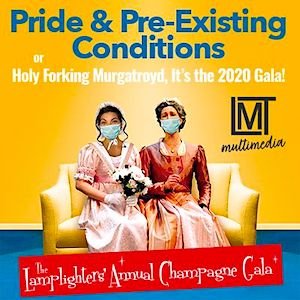 G&S’s oldest American cousins, now in their seventh decade, San Francisco’s Lamplighters Music Theatre, had perhaps fewer disasters in this former land of milk and honey, but the Pandemic of 2020 continues to test their endurance and bonhomie.

To show that “we’re still here,” to have fun, and — not so incidentally — raise funds, Lamplighters are staging the Original Gala for 2020: Pride and Pre-Existing Conditions, on Oct. 25, at 3 p.m. PDT.

Our most creative works each year are the original shows that we write every Fall for over 50 years for our Gala. This year it includes three 30-minute videos, each a spoof on a very popular work, set to Sullivan’s music.

We have 28 cast members, and we are routing green screens, lighting kits and mics for recording music and some videos at home, plus recording others one at a time at our Bryant Street rehearsal space.

All is being done safely; masks and shields, no more than six people at a time in our 6,000 SF facility, all singing individually recorded, then stitched together by our video and audio engineers.

We are blessed; One company member is a professional documentary maker and former KQED employee, another does training videos for Google, others are learning on the job under their tutelage.”

Lamplighters veteran F. Lawrence Ewing recorded his part as Michael in The Good Plot in the company’s Bryant Street office, Sabrina Romero recorded her part as Rose in their duet at her home, then videographer Lawrence Dillon and Nicolas Aliaga (second camera and co-editing), stitched it together flawlessly.

As many times before, former Executive Director Barbara Heroux is creative director, and Jonathan Spencer is both gala chair and the virtual chorus and overture editor. “It takes a large village to make a gala,” says Blalock, adding: “we started in April to make and stream Zoom- based productions. We are taking things a major step forward with our gala and producing new art in a new way.”

G&S wedded to cutting-edge technology is nothing new, if you remember the sixth Dr. Who’s tip of the chapeau to “The Very Model of a Modern Major General”:

Lamplighters Call on Sherlock Holmes and Dr. Who

Gilbert and Sullivan get their annual freshening up in the Lamplighters Music Theatre parody show.

The Gilbert and Sullivan operetta gets an update but without losing any of its charm.