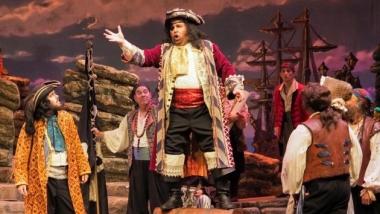 Among the quirky Gilbert & Sullivan operas, The Pirates of Penzance is one of the quirkier, and now, in a new production by the Lamplighters, it’s probably the quirkiest.

The 1879 work is subtitled “The Slave of Duty,” and the slender story is based on the seemingly inconsequential fact that its timid hero, Frederic, was born on Feb. 29. Shy and not very bright, Frederic accepts the interpretation that reaching his 21st leap-year birthday — when he can be free from his indenture to the pirates — will require 84 years in real time.

That’s just the beginning. What follows is a melody- and hilarity-filled evening, with songs such as Mabel’s “Poor Wand’ring One,” one of the most famous G&S numbers, “I Am the Very Model of a Modern Major-General,” the pirates-police ensemble “A Rollicking Band of Pirates We,” and so much more.

But as for the quirk factor, regard the work of Pocket Opera’s Nicolas Aliaga, making his Lamplighters debut as a stage director. His big move capitalizes on the opera’s already strong emphasis on the spunky presence of the Major General’s many wards:

Every moment brings a treasure
Of its own especial pleasure;
Though the moments quickly die,
Greet them gaily as they fly.

In this production, he turns the girls into suffragettes, which moves the action almost two decades into the future from the opera’s premiere.

“Women began involving themselves in fields long-considered the sphere of the male sex — the sciences, politics, sport, sociology, economics, archaeology, to name a few. Women began to dress for themselves rather than for the male gaze (even cross-dressing for empowerment). Our wards are fine examples of New Women. They are studious, strong, athletic, independent and unconventional. In short, they are the very modern wards of a very modern Major-General.”

As already portrayed in the G&S original, the gentle, sensitive pirates are “only more so” in this production, aligning with modern sensibilities.

Unlike the controversy over the Lamplighters’ previous Regieoper adventure with The Mikado, switching the action from Japan to Italy, this production is likely to be well-accepted for taking some well-intentioned liberties.

Mabel and Frederic are double-cast, with Julia Mulholland and Erin O’Meally, Michael Desnoyers and Carmelo Tringali. Gwendolyn Kuhlmann and Deborah Rosengaus alternate as Ruth, F. Lawrence Ewing is the Major-General.

Last weekend’s performances in Walnut Creek are followed next weekend (Aug. 11 and 12) in Mountain View, and the weekend after that in San Francisco’s Yerba Buena Center for the Arts Theater, concluding the run in the Livermore Valley Performing Arts Center, Aug. 24–25.

The first complete recording of the famous 1937 agit-prop opera is surprisingly timely.