Composer Jake Heggie’s latest song cycle has perhaps the most unhappy genesis. It was commissioned by baritone Joshua Hopkins, whose sister, Nathalie Warmerdam, was one of three women murdered in 2015 by a single man in one of Canada’s worst cases of domestic violence. All three women were ex-partners of the killer.

In the course of Hopkins’s quest to raise awareness about the constant, unremarked epidemic of violence against women, he asked the world-famous writer Margaret Atwood to write lyrics for the songs. Surprisingly, the author of The Handmaid’s Tale, which has been adapted as an opera (among many other adaptions), agreed.

“I have known two women who were murdered, both by jealous former romantic partners, so the killing of Joshua’s sister resonated with me,” said Atwood. “But I could not promise anything: with songs and poems, they either arrive or they don't. I then wrote the sequence in one session. I made the ‘sisters’ plural because they are indeed — unhappily — very plural. Sisters, daughters, mothers. So many.”

“Margaret sent a perfect, complete set of eight texts and asked, ‘How about something like this?’” Heggie recalled. “Josh and I were stunned and deeply moved. I am in complete awe of Margaret’s genius — and it was a great honor and privilege to explore every corner of her poems to shape this musical, emotional journey for Josh. The concept of the piece is something similar to Schubert’s epic Die Winterreise, with Josh as a wanderer. He walks through the world wondering how to make sense of this event, filled with grief and rage, on a quest for connection and transformation.” 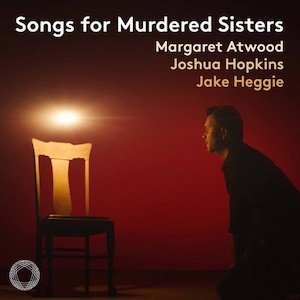 Heggie’s work, Songs for Murdered Sisters, for voice and piano, was commissioned by Houston Grand Opera and, in a version for voice and orchestra, by Canada’s National Art Centre Orchestra. The live premieres have been postponed and the work is now available as a digital album and a film directed by James Niebuhr, which was shot at Oakland’s abandoned 16th Street train station, and recorded at Skywalker Sound in Marin County. The film is already available via Marquee TV and its Roku, Apple TV, and Amazon Fire apps, and will stream free until March 21 in more than 20 countries. The album, on Pentatone Records, will drop on March 5.

“I felt so numb after Nathalie’s murder,” Hopkins related. “It was so shocking it was almost impossible to comprehend. But Margaret’s words and Jake’s music have opened a door and stepping through it has allowed me to access all my complicated feelings surrounding Nathalie’s death. You don’t process grief in a linear fashion — any emotion can come up any time you’re experiencing an emotional influx. But meaning transforms grief into a more peaceful and hopeful experience. These songs have provided that meaning for me.”

“It was as inspiring and thrilling to work with Margaret Atwood as it was to collaborate with Sister Helen Prejean and Terrence McNally. She has made Joshua Hopkins’s deeply personal journey feel universal, so that we are all part of the story.

“Social justice figures prominently in many of my works, starting with Dead Man Walking, and this song cycle is a continuation of that wish to tell stories that matter deeply, are timely and timeless. I even use a musical quote from Dead Man Walking in the penultimate song, where the question of forgiveness and transformation emerges.”

Hopkins hopes that the message of Songs for Murdered Sisters will resonate in social action. Through a #WhiteRibbonSisters social media campaign, he aims to motivate 10,000 men to take the White Ribbon Pledge, promising “never to commit, condone, or remain silent about all forms of gender-based violence.”

“We thank Joshua for honoring the memory of his sister and all the sisters lost to gender-based violence,” said Humberto Carolo, Executive Director of White Ribbon and co-chair of the Global MenEngage Alliance. “We call on all men to join with us — together we can work toward a gender-equitable, safe, peaceful, and inclusive world.”

Here’s an operatic comedy that will leave you feeling good about humanity.