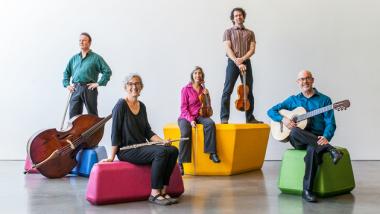 Left Coast Doubles Down on the Old-New Model

Building on the successes of past seasons, the Bay Area-based Left Coast Chamber Ensemble has announced an eclectic 2018-19 series that reaffirms the group’s artistic mission: the exploration of “chamber music past, present, and future.”

Firmly ensconced in both San Francisco and Berkeley venues, the ensemble will present five programs with two performances each. As always, new works, programmatic theming, a roster of guest collaborators, and various configurations of the group’s member musicians keep things interesting.

Kicking off October 6 in Berkeley and October 8 at the San Francisco Conservatory of Music, the first program of the new season is titled “Singing the Gamut” and highlights LCCE soprano Nikki Einfeld in an array of rarely heard songs, including Alfred Bachelet’s “Chere nuit,” written for Nellie Melba, Mario Davidovsky’s Festino, as well as a world premiere from UC Davis student Jonathan Favero. The concerts open with Charles Peck’s Sunburst for Piano Quartet, the 2018 winner of LCCE’s annual composition contest.

Next, the group collaborates with contemporary vocal ensemble Volti in two new works for assorted voices and instruments. The oboe-heavy program also features a world premiere composition for the group’s two oboists, something of a charming anomaly for a 14-person chamber music collective.

In January of the new year, LCCE unveils one of their bigger projects, a concerto for two cellos, percussion, flute, and cello choir by Brazilian-American composer Clarice Assad. Then in March, the ensemble bids adieu (for the second time!) to member violist and composer Kurt Rhodes, in a program that includes Rebecca Clarke’s Viola Sonata, an absolute gem of the early 20th-century chamber repertoire.

Spring of 2019 sees LCCE taking up residency in the Doug Adams Gallery of the Graduate Theological Union’s Center for the Arts and Religion, a community-oriented space in Berkeley; the ensemble will present a series of classes and performances, with details to be announced.

The season concludes in June with a double bill of chamber operas concerning the lives of Italian painter Artemisia Gentileschi (Artemisia, by Laura Schwendinger) and Depression-era photographer Dorothea Lange (From the Field, by Christopher Stark). The program is reminiscent of last season’s “Death and A Knight,” also a chamber opera double bill, which sold out both performances and met with critical attention.