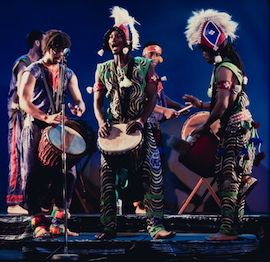 The Madness of the Elephant

Duniya Dance and Drum Company presents The Madness of the Elephant in Kanbar Hall at the Jewish Community Center of San Francisco on April 5 and 6. The West African dance, music, and theater performance, under the direction of Bongo Sidibe, explores the reign of Guinea’s first President, Sekou Touré.

A controversial figure, nicknamed "The Elephant," Sekou Touré was a benefactor of Guinea’s traditional arts, as well as a paranoid dictator.

The show features Mamady "Tambou" Mansaré, principal flute player with Les Ballets Africains, who is also a dancer, singer, and acrobat. His father (from 1964-2004), his grandfather (from 1958-1964) and Mansaré himself are the only people who have ever had the honor of holding the position of principal flute.

Mamady is a famed recording artist in West Africa: His music can be heard on many labels and with many artists on recordings such as Momo Wandel Soumah’s Matchowe, Afro Swing and Momo Le Doyen; Mamady Keita’s Mögöbalu, Mamady Lèè and Mandeng Djara; Les Ballets Africains’ La Mémoire du Manding, Héritage, and Silo (and others); Les Espoirs de Coronthie’s Tinkhinyi, and others.

Mamady is a member of the Malinke ethnic group and is a direct descendant of Sundiata Keita, the founder of the Mandingo Empire of the 13th century. He has been rooted in the stories and traditions of his culture since birth and now takes pride in his role as a cultural ambassador for his country. He has been organizing and leading classes in both the capital city Conakry, and his native village deep in the interior of Guinea.