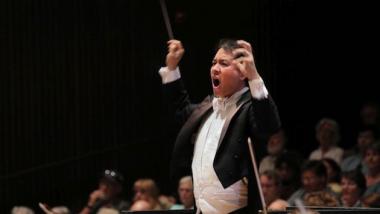 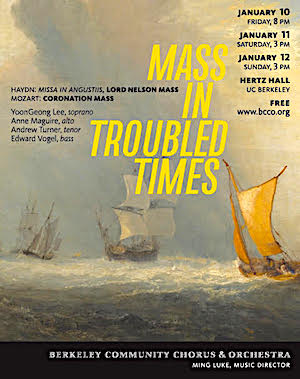 The title is a translation of the Haydn Mass’s original name, “Missa in Angustiis.” The work, Hob. XXII/11, was written in 1798 as Napoleon Bonaparte had defeated the Austrian army in four major battles, crossed the Alps, and threatened Vienna itself.

“Troubled times” turned to jubilation when Nelson defeated the French navy in the Battle of the Nile and was heralded as the “savior of Europe.” The Mass, Haydn’s greatest oratorio, then acquired the name which it still carries today. The title became firmly fixed when, in 1800, Nelson himself visited the Esterházy court, accompanied by his mistress, Lady Hamilton, where they met the composer.

While Mozart and Haydn had the utmost respect for each other, they had very different career trajectories. In this concert series, we explore works composed during critical times in each composer’s life.

After a fruitless 18-month job search, the 23-year-old Mozart returned to Salzburg to work for the Archbishop as organist and concertmaster, where he wrote the “Coronation” Mass in 1779.  In contrast, Haydn at age 66 was a mature and highly successful composer when he wrote the “Lord Nelson” Mass in 1798.

Despite differing historical and personal circumstances, both pieces are timeless works of incredible craft, each deeply connected to its era. We’re excited to explore these two works and present them in January.”

The shorter, festive “Coronation” Mass is considered the best of Mozart’s Salzburg masses. It is one of 17 “missa breves,” short so the music will not detract from the liturgy, as required by his new employer, the Archbishop. Concise and original in composition, the instruments double the alto, tenor, and bass parts. The soloists’ voices are used throughout in pairs, quartets, or solo lines interwoven among the lines sung by the chorus.

The origins of the name “Coronation” Mass are unclear. It may have been performed at imperial coronations in Prague between 1790–1792. It’s a delightful work on a grand scale, with soloists, chorus, and orchestra, written in C major.

The “Lord Nelson” Mass is Haydn’s only such work in a minor key, reflecting the sense of foreboding and dread at the time of its genesis, “something,” Luke says, “that may seem familiar to us today.”

Count Esterházy, Haydn’s patron, had dismissed the wind players from his orchestra, leaving Haydn with timpani and brass instrumentalists, which give a yet darker color to the score.

Luke has an extensive training program for young conductors, and for these concerts he shares conducting with assistant Julia Morris, who runs part of every rehearsal, many of the sectionals, and will be conducting the longer half of the Saturday concert.

“Ming believes strongly that BCCO should support the training of young conductors,” says BCCO publicist and chorus veteran Janice Murota. “He works closely with an assistant and sometimes one or two apprentices throughout the year. They attend and help lead every rehearsal and run several sectionals during the term. He is really generous with podium time.

“Typically, the assistant conductors get to conduct a movement or more of the pieces being performed. At these concerts, he is giving Julia Morris the entire Haydn for Saturday. Because of her growth with BCCO, Ming is encouraging her after two years as assistant with us, instead of the normal three years, to go to grad school.”

The “community chorus” in BCCO’s name sets up expectations demolished by the amateur musicians, according to the record of their accomplishments. With a 53-year history of free concerts, based on BCCO’s foundational belief that “everyone should be able to enjoy great music,” the chorus has maintained its tradition through the years, many lean ones, welcoming donations, but not charging admission.

Performing large, difficult repertory at home, BCCO even has an international presence with three major overseas tours since Luke took over as music director in 2011.

The first tour in summer of 2013 was to Eastern Europe; the highlight was singing the Dvořák Requiem at the Rudolfinum, in Dvořák Hall in Prague. Ming considers the performance, well received by the audience, a highlight of his career.

The second tour was to Central Europe, in 2016, where BCCO sang the Verdi Requiem in Belgium’s Bruges Concertgebouw and St. Martin’s Cathedral in Ypres. The tour concluded in Stuttgart, Germany.

This year’s tour with the Brahms Requiem took place in Nokia Hall in Tallinn, Estonia; Riga Cathedral in Latvia; and the Stockholm Konserthuset, whose main hall is used for the presentation of the Nobel prizes.

A tour through the conductor’s calendar reveals a dizzying roster of impressive commitments.