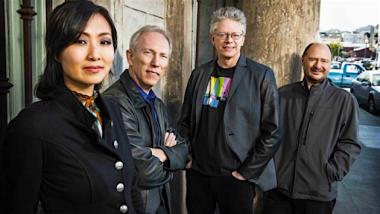 For all of Kronos’s 46 years, space has been a lynchpin of the quartet’s interest and programming. Once again, Kronos will take a leading role when MAX 2019: A Space Festival rolls into town, May 16–18.

This is the first MAX event, Media Art Xploration’s presentation of artists, scientists, and artist-engineers in important San Francisco venues exploring the new space age, and the extraordinary scientific advances in this field.

Among festival attractions: Kronos will perform its Eclipse program from an Exploratorium event during the 2017 solar eclipse, producer Sasha Samochina from the Jet Propulsion Laboratory’s Visual Operations Lab explores the relationship between human and machine, and dancer Alice Sheppard engages in a pas de deux with a robot designed by artist-engineer Alexander Reben. Also playwright, performer, and composer Ethan Lipton (who has performed with Laurie Anderson) will perform his musical The Outer Space.

Diverse venues are provided by the participants: the California Academy of Sciences, Exploratorium, Z Space, and San Francisco Playhouse. The festival will present musicians, performers, photographers, artist-engineers, conceptual artists, game designers, and drag queens, all tasked with “bringing the exploration of space to immersive, educational, and entertaining life.”

The MAX Festival opening night on May 16 takes place in the Exploratorium’s Kanbar Forum (repeated on May 18), featuring a talk by Sarah Hotchkiss with clips from sci-fi films about space travel. The audience will be involved in helping to determine which fictions of the future might actually become reality.

On the Exploratorium’s open-air plaza, the Heisenberg game will be offered on May 16, in the evening and May 18, in the afternoon. It’s described as a “large-group, site-specific, augmented reality game that explores uncertainty, precision, and chaos.”

Participants, instructions state, start at the beginning of the universe and move through a series of matter/energy transformations, each emphasizing limits on personal understanding — a cue from particle physics and the game’s namesake, the Heisenberg uncertainty principle.

The centerpiece of the festival is a reprise performance, on May 17 in the Exploratorium, of the Kronos Eclipse, “233rd Day, before and after Totality” by the Exploratorium’s composer-in-residence Wayne Grim. The piece was originally performed on Aug. 21, 2017, to a computer sonification of the total solar eclipse, in real time, as the eclipse progressed.

Several times on each day, Christine Zuercher will present her ham-radio performance art act, “The Dig: Spacewoman of the Underground,” in Gallery 4 of the Exploratorium. Assisted by a statistician working alongside with pencil and paper, Zuercher — says the announcement — “will attempt to dig a hole to the other side of the planet while wearing a handmade spacesuit.”

Adjacent to her dig will be a ham radio used to receive transmissions from all parts of the globe. Meanwhile, Exploratorium viewers will be invited to investigate her findings and “tune into the radio transmissions in order to experience the voice of the unknown.” The Dig, Zuercher says, celebrates the human urge to explore while interrogating the instinct to exploit.

Leading the team that is creating and managing the festival is Kay Matschullat, a performing and media arts director, producer, and educator. Her work is dedicated to “deconstructing barriers and exploring inventive collaborations.”

In 2013, Matschullat set her sights on driving innovation in performing arts through the intersection of technology and the arts by founding Scriptopia, the first software application for collaborative, online script development.

Speaking about the festival, Matschullat says its purpose is “addressing the new space age,” and experiencing “how we are all under one sky, our imaginations coming together.”

She values Kronos’s participation because “they have always been forward thinking and seem to thrive at the nexus of classical models and contemporary ideas. We were delighted when they wanted to reprise this piece [Eclipse], especially because it uses media in an immediate way, and that is another one of our missions.”

Among many other events, there is the May 17 Extraterrestrial — A Drag Invasion in Z Space Theater, of “cosmic creations, supernatural lip syncs, galactic performance, and helping another Dorothy back to earth.” Participating are:

Kronos Quartet and S.F. Exploratorium Collaborate on Music for a Total Solar Eclipse

Sound artist and composer Wayne Grim has created a musical accompaniment for the solar eclipse viewing at the Exploratorium.

The latest work by Lisa Mezzacappa is being performed at the Exploratorium in San Francisco, and imagines the frontiers of science in musical terms.

The space age has inspired many musicians to write music inspired by our efforts to understand our solar system and universe. Here's to inspiration from the stars.