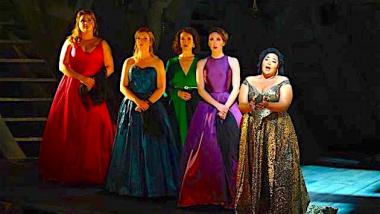 As taps sound today for two major 2020 summer music festivals in the San Francisco Bay Area, both do it with honors, making efforts to take care of their artists and staff in the wake of the coronavirus havoc.

Many mid-summer events have already been canceled or postponed, as stay-at-home orders now extend through May and the S.F. War Memorial and Performing Arts Center remains closed, eliminating much-awaited productions by SF Opera, SF Symphony, SF Ballet, and others. Still, those scheduled for late summer had held out hope — but no longer.

These are the arrangements the two organizations made:

“Merola is currently in the process of determining the level of financial assistance that will be offered to the young artists chosen to be in the 2020 program, as we understand the hardship they will face not having the support of the summer program,” Merola Executive Director Jean Kellogg told SFCV.

“The year-round staff will continue to be employed without reduction, and Merola continues to provide financial support through the Merola Artists Emergency Fund to alumni from the last five years who have lost work due to COVID-19.

“All 2020 young artists will be invited back to participate in the summer of 2021, and we look forward to welcoming back our guest faculty as well.”

[email protected] Executive Director Edward P. Sweeney told SFCV: “We are delighted to be able to make partial payments to our artists and our contract professionals. Not only that, but the fact that we are able to reengage those same artists and staff in 2021 means we not only help them financially now but give them some firm commitments for the future.

“Likewise, we are accepting all the currently accepted International Program and Young Performers Program participants to the 2021 festival. In short, we remain optimistic that this wonderful community, centered around music, will return and thrive in the years to come.”

The [email protected] announcement from Artistic Directors David Finckel and Wu Han said: “This is heartbreaking for all of us. The highlight of our entire year is the three weeks every summer when we all come together to enjoy the music, the artists, and the young musicians that make [email protected] so special. Yet the health and safety of our community are of paramount importance to us.

“While we look forward to presenting this wonderful festival next summer, in the meantime we will endeavor to bring to you, through digital channels, all that we can to keep [email protected] in your lives and in your hearts.

“Like so many people around the globe, [email protected]’s artists and seasonal staff are facing a sudden and drastic loss of income due to months of canceled work. [email protected] is proud to support these musicians and staff during this time of crisis by paying a portion of the fees they would have received had the festival gone forward as planned.

“[email protected] has therefore established an Artist Support Fund, with all donations to this fund contributing directly towards the fees paid to 2020 artists and seasonal staff. Donations can be made on [email protected]’s website, by calling Development Director Lee Ramsey at 650-330-2133, or by emailing [email protected]

“[email protected] is also asking patrons to consider donating the value of their summer festival tickets, which will directly support these individuals experiencing unexpected financial hardship.”

[email protected]’s office is currently closed, but the administrative staff continues to work remotely to maintain essential administrative functions, to prepare the opening of the organization’s new home on Menlo School’s campus, the Spieker Center for the Performing Arts, as well as to plan the 2021 Focus Residencies and the rescheduled season to come.

For Merola, its summer training program and festival canceled for the first time in its 63-year history, Board President Barbara Bruser Clark and Board Chairman Patrick Wilken said, “While we have heavy hearts at the moment, we still have much to be grateful for during this difficult period: the far-reaching impact Merola training has had for more than six decades, which can be seen on opera stages locally and globally, as well as our deeply committed members and donors who have helped ensure that we have the financial strength to weather this crisis and stay true to our mission.”

The online enrichment Merola will offer is intended to help ensure the artists’ continued artistic development in advance of their participation in the 2021 program. Current ticketholders to this summer’s performances will be contacted and will have the option to donate the value of their tickets or receive a refund.

Merola officials and the board have spent a great deal of time considering alternatives, but in the end, “cancellation was the safest and most prudent course of action for the young artists, faculty, and staff members of the organization, as well as its loyal supporters and the community at large.”

“We can’t focus on what might have been,” said retiring Merola Artistic Director Sheri Greenawald. “We must focus on finding ways of exploring this talent in our current reality. As we flatten the curve of the virus, we will elevate our efforts to do what Merola does best: train young artists.”

While there are differences in the way organizations handle their temporary closures, most of them (see below) try to do their best, in an all-around bad situation, for their artists and staff. The exceptions, surprisingly, are such major organizations as the Metropolitan Opera and the Kennedy Center, both leaving their artists high and dry.

At the Met, the largest performing arts organization in the U.S. by budget, General Manager Peter Gelb invoked a “force majeure” provision, declaring a layoff of the opera’s orchestral players, chorus singers, and stagehands without pay beyond March 31. Nor would the Met pay contracted solo singers for canceled performances.

In a subsequent settlement, the Met’s management agreed to continue to pay healthcare premiums for its employees and instrument insurance for many of its musicians.

Creating a great controversy, the Kennedy Center, which received $25 million in federal emergency funding, furloughed hundreds of employees and the 96-member National Symphony Orchestra without pay. Kennedy Center President Deborah Rutter later explained — but did not remedy — the situation and announced that she is forgoing her $1.2 million salary.

After angry responses, involving the U.S. Congress, the Center announced using $7.5 million of the bailout to cover six months of benefits — pension, social security, and healthcare — for all employees, including those furloughed. After negotiations with the D.C. Federation of Musicians, National Symphony furloughs were changed to pay cuts amounting to 35 percent of the total payroll until early September.

Major symphony orchestras were doing much better from the get-go. The San Francisco Symphony and the New York and Los Angeles Philharmonics did not dismiss employees and artists without pay.

San Francisco Opera released this statement on Tuesday, May 5:

“We have been in active conversations with all eight of our union partners, and the company is in the process of finalizing these agreements. We will be maintaining compensation — not at full amounts but at significant amounts — for a large majority of those who were expecting to work this summer but who are now no longer able to, and are maintaining healthcare contributions during this time.

“Regarding administrative staff, for the period through July 31, no furloughs or layoffs for staff. Healthcare and other benefits will continue. Staff leadership and staff at higher compensation levels will be taking 10-to-20-percent reductions in salary beginning later this month.”

Responding to COVID-19, the New York Philharmonic reached an agreement with the musicians to reduce salaries. Beginning April 1, all musicians, regardless of seniority, are paid the basic minimum salary of $2,952 per week ($153,504 per year). For senior players this represents a big cut; for many others it’s not a significant reduction.

The Coalition of Broadway Unions and Guilds represents some 100,000 artists and workers involved in theater, opera, dance, and concerts on Broadway, at Lincoln Center, and at venues across the city — “key drivers to New York’s economy,” on whom suspension of performances is taking a massive financial toll. The Coalition has been working on getting emergency financial and healthcare protections for its members.

At the Los Angeles Philharmonic, COVID-response payroll reductions of 35 percent in the aggregate include the layoffs of 94 part-time employees and pay cuts of more than 35 percent for the leadership team. Orchestra members are receiving 65 percent of their weekly minimum scale beginning April 20, and Music Director Gustavo Dudamel stopped taking his salary, estimated at $1.5 million. The LA Phil maintains health insurance for all full-time employees.

Look for fresh faces, premieres, and beloved regulars in the coming season.