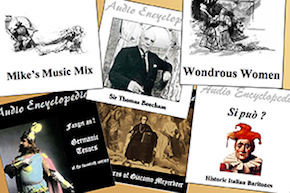 He was one of the most remarkable people I have ever known. His love of music, his intimate knowledge of singers, his generosity to all, his improbable struggle to survive a condition that doctors had expected to kill him decades ago ... a unique friend, now gone.

It is with great sadness I must announce the passing of our beloved Mike Richter. He passed away peacefully in his sleep at 4:45 this early morning.

For condolences, I will let all know shortly where to direct the wishes. No services are planned.

Among the many tributes to Mike on various websites, here's this from Albert Innaurato on Opera-L:

... his work was invaluable. He dedicated himself to preserving easily overlooked but great performances and artists; he provided remarkable collections of operas and artists. He provided a proof that performing genius really exists, a proof beyond memory or assertion, by documenting with intelligence and care a huge range of performances.

He provided the only really extensive collection of very early recordings, documenting vanished styles and ways of performing music the composers likely knew and accepted.

In a time when very little of the Russian operatic rep and only a few artists, some of them great, were known in the West, he offered superb documentation. He worked on early sound films of operas and singers, also circulated early TV performances. And all of this was done at no financial profit to him. His site charged little, he was happy to give his work away.

His heart attack was reported in 2009; he seemed to recover fast, even more so two years ago.