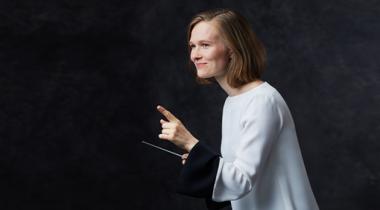 As far as the San Francisco Symphony is concerned, Mirga Gražinyte-Tyla, who cancelled her debut in Davies Hall in January, will conduct a fascinating program here a year from now. That’s apparently not what she thinks will happen.

At 32, one of the most exciting young talents around, Gražinyte-Tyla is music director of the City of Birmingham Symphony Orchestra, where her predecessors included Simon Rattle, Sakari Oramo, and Andris Nelsons.

Even her postponed San Francisco appearance became a headline event when Esa-Pekka Salonen, just named as the next music director of the S.F. Symphony to succeed Michael Tilson Thomas, took over and conducted a greatly acclaimed concert.

The reason for Gražinyte-Tyla’s last and next San Francisco cancellation is the same: the birth of her first child last year. The news — apparently still unknown to S.F. Symphony, which hasn’t changed the concert announcement — is that after returning to the podium and juggling work and motherhood, she decided last week to cancel all touring for the next two years.

As she told The Guardian last week, “Coming back so quickly was harder than I had anticipated. It was all a very sharp learning curve, and of course continues to be. It’s a new situation of dividing your concentration, finding the balance.

“In this growing emancipation there’s been an emphasis on women proving they could go on exactly as before. I think now we are entering another period. We have to admit that everything changes: mind, body, life. Of course, you can do many things you could before but it’s a huge change, and it’s dishonest to pretend otherwise.”

She has cancelled all guest conducting for at least two years: “I need more space, more time, around my work. I am totally on a search…”

Delaying the San Francisco debut comes after a period when she was so close so long: a Gustavo Dudamel fellow at the Los Angeles Philharmonic in the 2012-13 season, Gražinyte-Tyla has served as the orchestra’s assistant conductor for two seasons and, for the 2016-17 season, as its associate conductor.

The Guardian interview notes the changing gender situation in the ranks of conductors:

Much has changed even in the short time Mirga has been in Birmingham. Elim Chan has been appointed principal guest conductor at the Royal Scottish National Orchestra, as well as chief conductor in Antwerp. Karina Canellakis takes over as chief conductor of the Netherlands Radio Philharmonic later this year.

Dalia Stasevska has a principal guest post at the BBC Symphony Orchestra. Susanna Mälkki, Jessica Cottis, and Alice Farnham are among several now in the frame, joining established figures such as Jane Glover, Marin Alsop, and Simone Young.”

Salonen’s approach was particularly apt on a new work from Anna Thorvaldsdottir.

With the final bows of Michael Tilson Thomas as music director, the orchestra gives clues to its future and sends its current director off in style.