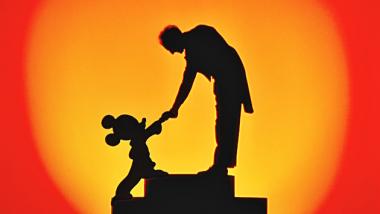 Move Over Bach, Pipe Down Dukas, Here’s a New Fantasia

Walt Disney’s Fantasia is all about music. It’s the first and foremost grand animation of classical music on film, an important first experience for nascent concert audiences ever since 1940 — an amazing run of 78 years.

That much we know. What is new, novel, and downright quirky is to see Fantasia without Bach, Beethoven, Tchaikovsky, et al. Instead, how about Fantasia: Live Film Re-Score with music by The Firmament? The event is described by the creator/performers as an iconic movie in a unique way — screened silently, accompanied by an all-new, live soundtrack.

Following this new Fantasia’s premiere last week at the Hole in the Head Film Festival, the show will be performed again on Dec. 9 in Japantown’s New People Cinema. Be ready for what the composer/performers describe as “mostly techno, acid, IDM, and ambient.” (IDM, apparently, is intelligent dance music, a problematic term coined on an Aphex Twins fans list.)

Who are these bold re-composers of the classics? The Firmament consists of Renzo Gorrio (score composer and sound designer at WNYC radio’s Snap Judgment) and Mark Golton (DJ with Brass Tax, Echo Space, others), joined by guest composers Andrew Vickers and Richard Haig.

Gorrio and Colton are participating in the festival for the third year, having performed live original scores for Akira and Mad Max: Fury Road. They use drum machines, synthesizers, and sequencers.

In much the way that the animators in the 1930s interpreted prior musical art with their own visual response, we are interpreting animated visual art and creating music which re-contextualizes the animators’ creation.

All four of us are accomplished, working, contemporary musicians (for example, I studied piano at University of Miami and have written for and performed with the New World Symphony Orchestra), who each have a unique, 21st-century musical vocabulary.

The Mouse that Roared: Philip Glass Takes on Walt Disney

Long Beach Opera’s The Perfect American examines the life of the visionary animator.

Kronos Goes to the Movies

A kaleidoscopic study of the intrepid quartet asks big questions about the nature and purpose of music.