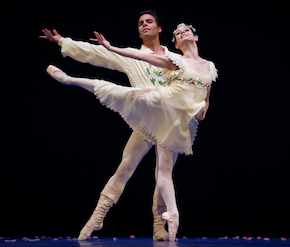 While Sonos (see item above) and the San Francisco Symphony (item below) are touring in Asia, the San Francisco Ballet was performing in Washington, D.C. in a six-night stand at Kennedy Center, concluding on Sunday.

Sarah Kaufman's review in The Washington Post was pretty much a rave, including kudos for the company

... offering a beautifully persuasive defense of the mixed bill — on artistic merits. Which is, after all, the argument that looks best onstage.

More than any single work, what stood out on this program was breadth and the depth of talent. The evening did not rest on the strengths of a single ballerina and a few soloists, as a full-length production might. Instead, here was the proof of a great artistic organization: range and ability.

In four vastly different pieces, we saw dancers of all ranks fill the stage with terrific momentum, with speed, energy, a refined finish to the steps and — even better — a shared esthetic. With its range of backgrounds and nationalities, the San Francisco Ballet is nonetheless cohesive. Its members are well rehearsed, technically polished, united even in their lean, ribbony physicality.

Then there was the spread of dance expression on view. None of the four works was familiar. Three were Washington premieres: Trio, by artistic director and principal choreographer Helgi Tomasson; RAkU, by choreographer-in-residence Yuri Possokhov; and Number Nine, by Christopher Wheeldon. All three were created last year. [The fourth piece was Frederick Ashton's Voices of Spring.]

The same reviewer was less complimentary about the company's Romeo and Juliet, missing the passion natural to the work, a characteristic previously pointed out in local reviews:

This production, choreographed by Artistic Director Helgi Tomasson, is aesthetically of a whole. It is tasteful, visually handsome and civilized in manner from start to finish. (The hookers are emphatic but never vulgar.) The dancing was clean, crisp. In the leading couple, Maria Kochetkova and Joan Boada, it was fully elegant. All the ballet lacked was dramatic vibrancy, the kind that draws you deeply into the story not merely as an admirer of the mechanics but as a participant in its emotional unrest.

Of course, that’s hard to do when there is little emotional unrest.

Throughout the ballet, one senses Tomasson’s ambivalence to Shakespearean passions. Clearly, he believes in beauty. This is everywhere in evidence: in the attention to details of technique and in the spaciousness of the choreography. The stage picture is never messy.
...
An eye for beauty is clear in Tomasson’s opening-night choice of Kochetkova as Juliet. The Moscow-born, Bolshoi-trained dancer possesses exquisitely shaped legs and feet and an overall quality of physical lightness. But in this role, one of the most glamorous in the ballerina catalogue and one that typically oozes with expressive possibilities, she stayed safely on the surface.

Kochetkova’s interpretive qualities were limited in a way that suggested she hasn’t been coached to develop them. She can flick her leg high up to the back, like the spreading of a great wing — but then you see that no, it’s not a symbol of flight, it’s just a shape. There is no reciprocal freedom in the rest of her body, no ripple of response in her waist or shoulders. She gives the impression of having dutifully learned when to show expression, rather than drawing on internal, spontaneous impulses. Her interpretation seems to begin and end with what she has been told to do.